Historic former hospital on market for $13.2 million in Victoria 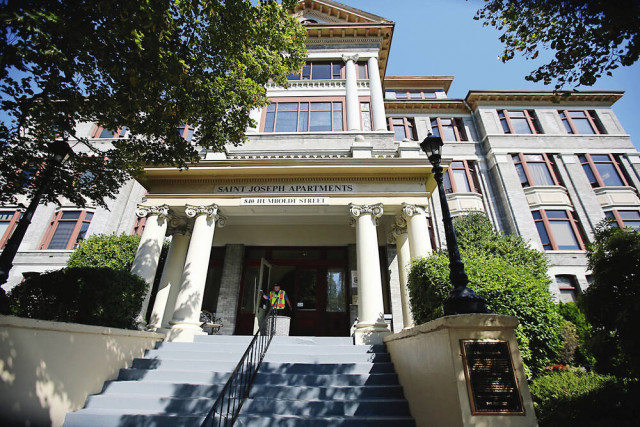 It comes with columns, mosaic tile floors, massive oak entrance doors, intricate stained glass windows, its own chapel and a sweet location on just over half an acre in the heart of downtown Victoria.

The former St. Joseph’s Hospital, which hasn’t been used for patient care for many years, contains 70 rental apartments, and a chapel that’s rented to artists. Constructed in 1908, it’s on Canada’s register of historic places and has a heritage designation with the City of Victoria.

Many Greater Victoria residents remember going to what was known as St. Joe’s, later named Victoria General Hospital. Thousands were born there. Many nurses also received their training at St. Joseph’s, which faces St. Ann’s Academy across Humboldt Street.

They were both born of the Sisters of St. Ann, a Roman Catholic order of nuns whose members first came to B.C. in the 1850s, eventually establishing the school and the nursing and teaching hospital.

The nuns began their nursing work in a log cabin, but later Mother Mary Providence and Dr. John Helmcken worked together to establish the hospital.

A two-storey brick building was opened in 1876 with 35 beds, and additions were made in subsequent years.

In the late 1960s, the Sisters of St. Ann transferred the building to the province and it was renamed Victoria General Hospital, according to the Victoria Heritage Foundation.

Two decades later, the new Victoria General Hospital opened in View Royal and the Humboldt Street facility shifted its focus to geriatric care and was called the Fairfield Health Centre.

The property has been owned privately for more than two decades. Schiffer Properties Corp., of Victoria, owns the building, according to provincial government records.

The site falls under a comprehensive zoning allowing for multiple uses, but its heritage status comes with limitations on what can be done with the building.

A three-year project to repoint its brick exterior recently wrapped up and its emergency stairwells have been rebuilt, he said Wednesday. The property’s marketing brochure says it has been seismically upgraded.

Of its 70 apartment units, 63 are studios and seven are one-bedrooms, which rent for below-market rates.

All are currently rented, Craig said. A bachelor suite in St. Joseph Apartments goes for $811 a month, well below what the Zumper rental website says is the average price to rent a ­studio apartment in Victoria: $1,811.

Units have hot plates but not full kitchens and there is no parking.

There’s a mix of tenants in the building, including some who use it as a pied-a-terre, Craig said.

Because of the building’s former use as a hospital, it had extra-wide hallways, which were used to install bathrooms in the units, Craig said. Many units have showers and some have bathtubs.

An elevator runs up to four storeys of the building, with another seven suites on the fifth level, he said.

Interest has been steady for the property, which went on the market two weeks ago, Craig said.