'On brink of collapse' 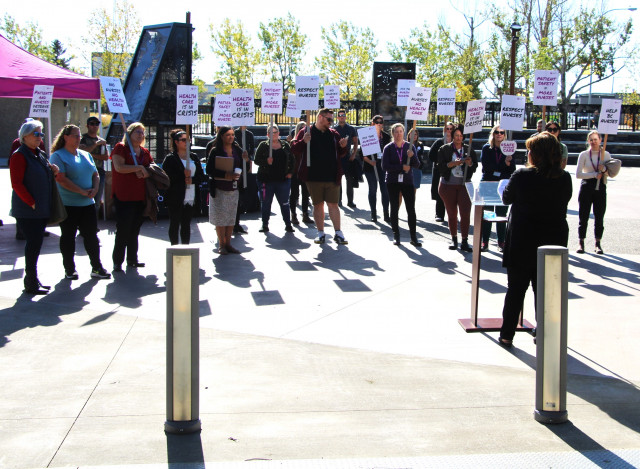 The B.C. Nurses Union believes the province’s healthcare system is at a crisis point and it’s demanding the NDP government act now before it’s too late.

“It’s on the brink of collapse,” said union vice-president Adriane Gear speaking to members and the public at a noon-hour rally Tuesday in Fort St. John.

“Almost daily, we are seeing service disruptions and temporary ER closures in communities across this province due to the nursing and physician shortage. This is not OK!” said Gear.

“Here in Fort St. John, the hospital department emergency room baseline nursing staff is far lower than any other ER around the province. How can the largest city in the northeast not have a fully functioning intensive care unit?,” she asked.

“Enough is enough. Get to work and make some changes fast before there is no healthcare to be had,” she told the crowd.

“Why do we have these shortages? Because nobody listened. Hospitals in Chetwynd and Mackenzie have gone on diversion many times, resulting in residents choosing long drives to other communities to receive care. Shame on them for that.”

“When I started back in 2020 with Northern Health, it was common to have a one nurse to four patient ratio. Now, it’s more common to have eight to ten patients for one nurse,” said Prince George palliative care nurse Jereme Bennett, who also attended the rally.

Bennett said that’s resulting in many nurses refusing or declining to take permanent positions, adding more strain on the system.

Grewal said some specialized care nurses are being expected to cover other areas they’re not familiar with or specially trained in.

“Health care is foundational to communities. If you don’t have good health care, good education and good public safety, you can’t build a community. It doesn’t simply matter how good your economy is,” explained Ackerman.

“We need to, pardon the pun, rip the band-aid off and start to deal with this.”

Kube believes the area’s MLA should shoulder some of the responsibility.

“Dan Davies is shirking his responsibility by not screaming loud enough, by not going to the people and asking what the people want.”

“We need to get some kind of residence up here to make it affordable for people who wanna come. We just can’t do this. We need more government funding. They’re quite willing to take our money but they don’t want to give us anything back in return and that’s not fair.”

“People need to stand up and start hollering,” added Kube.