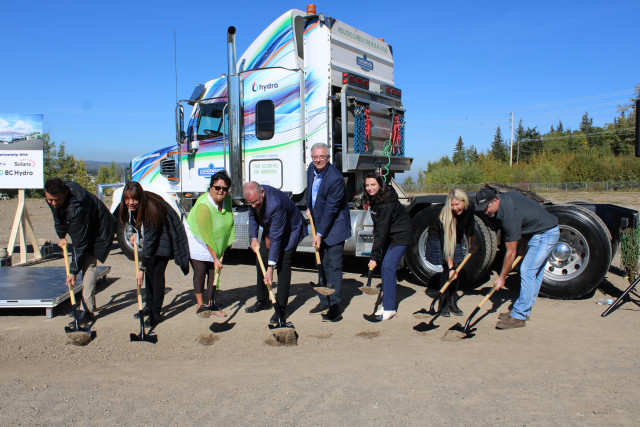 This marks the first project in the company’s western Canadian hydrogen corridor which will serve B.C. and Alberta-based heavy duty trucks that have been converted to run on both hydrogen and diesel using Hydra’s zero cost co-combustion conversion kits.

“We realize that part of the response to climate change is lower our CO2 emissions whenever and wherever possible. Hydra Energy announced last fall that has the technology system to equip commercial trucks transports by hydrogen fuel that resulted 40 per cent lower emissions,” said Lheidli T’enneh Chief Dolleen Logan during the ground-breaking ceremony.

“Now that Prince George will be home to the world’s largest hydrogen refueling station that is exactly the direction lowering emissions that our members can support.”

Hydra’s new Prince George refueling station and hydrogen production will be located on five acres on Sintich Road, will produce 3,250 kilograms of hydrogen a per day and can refuel as quickly as diesel and up to 24 converted trucks each hour across four bays.

The stations low-carbon hydrogen is being produced from two on-site, 5 megawatt electrolysers with electricity coming from BC Hydro, B.C.’s main electricity utility with 31 hydroelectric facilities throughout the province.

“The upcoming station is both profitable and reduces emissions while helping us produce energy in our own backyards,” said CEO of Hydra Energy Jessica Verhagen, noting the Prince George region is a perfect place to demonstrate the hydrogen conversion technology due to the cold weather, challenging terrain and the heavy payloads common in the area.

“It's uncommon for other alternative vehicles right now to be able to get to that level of cold weather and the other benefit is weight, so if you’re using say a battery for example it weighs quite a bit more than the hydrogen kit that we put on the back of the truck, and that reduces payload for trucks,” explains Verhagen.

“Those are some of the benefits that we see in the short term. Of course, in the long term, all solutions are needed for big problems but I think that Hydra forms part of that solution.”

Arlene Gagne, CEO of trucking company Lodgewood Enterprises and Diamond Mechanical is the owner of the first hydrogen combustion truck, and spoke at the ground-breaking about her adoption of the technology.

“I am excited to see the progress being made to supply both hydrogen and diesel at the same location. This is going to be fantastic and huge. The fueling time is less than 10 minutes now on these trucks, the drivers won't have to go to two separate locations to get fuel,” said Gagne.

“I look forward to executing a program that's going to see more trucks like mine, that fuel here and become part of the solution to reduce our greenhouse gases.”

Bruce Ralston, B.C.’s minister of energy Mines and low carbon innovation said Hydra continues to crack heavy-duty trucking, which is the most difficult to decarbonize sector.

It accounts for just over one per over 1 per cent of vehicles on Canadian roads but 30 per cent of greenhouse gas emissions.

“Hydrogen is capturing the imagination of a lot of people in the world at this time, because when you burn hydrogen, in the right conditions, there are no emissions,” said Ralston.

He said the challenge is producing hydrogen and getting it to market so it can be commercialized.

“So this project is a very exciting one because it focuses on local industry trucking by dramatically reducing emissions. It's going to be profitable, involves no capital outlay for the trucking companies, so they can get in without having to put up a big slice of money,” said Ralston.

He noted Hydra’s technology also eliminates range anxiety by being able to seamlessly transition between hydrogen and diesel fuels depending on the job, and the region they're working in.

“So that you don't have that anxiety about running out and leaving your truck high and dry somewhere say west of Smithers or something like that."

Prince George to be a future hydrogen hub

“It really is a step forward for the city of Prince George, it really gives us an opportunity over the next number of years to meet our reduction in greenhouse gas emissions and that is a significant piece for us,” said Hall.

“It really does set us on the world map, there's no question about it. And my opinion is that it reinforces the fact that we are B.C.’s northern capital. You take a look at the resource sector that we have around us and it's really flourishing at this point in time, and I have no doubt that it will continue to do that.”

Yemi Adefulu executive director of the BC Centre for Innovation in Clean Energy, which funds innovative clean energy solutions said Hydra was one of the first projects the centre funded.

“When you think about the use of diesel today, and the ability to sort of transition, you need to be able to ensure that we can decarbonize that without waiting for all the infrastructure to be in place for us,” said Adefulu.

“Hydro provides a solution that is a solution for today where they can, because of the co-combustion, they have the ability to actually reduce the amount of diesel usage and replace that with clean hydrogen and if they do that, then we're actually starting to get trucks on the road and ensure that these trucks are cleaner trucks than they currently are today.”

Hydra’s Prince George station will be operational in early 2024.