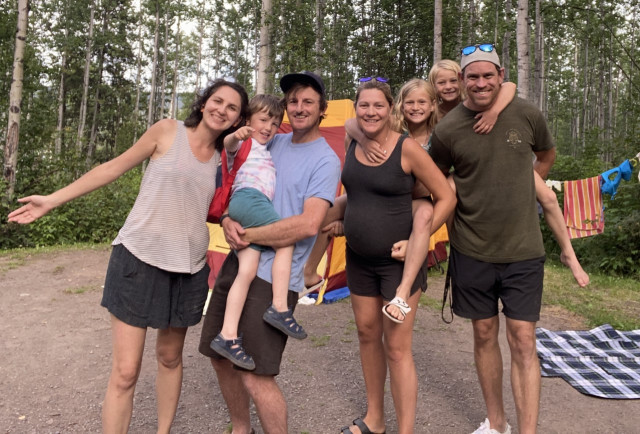 Photo: .
Katya Ballos (left) with her son Oscar and husband, Jason Trigg, along with the Eller family, Rachel and Jordan and their kids Olivia and Maren during a camping trip this summer

There are selfless acts and then there are gestures you hear about that simply stop you in your tracks.

Case in point being an incredible offer made by one relative stranger to another, from one mom to another, 1,100 kilometres apart.

Despite having no connection – other than both being moms and both being elementary school teachers - Rachel Eller, of Smithers, near Terrace, agreed to have a baby via donated eggs from Katya Ballos, of Richmond.

And after just a few weeks of phone calls and Facetimes – and a ton of research and questions – the pair entered into a contract of body and mind, with 37-year-old Eller becoming a surrogate for Ballos and her husband, Jason Trigg.

The Smithers mom-of-two said she was touched last year by Ballos’ appeal on Instagram for a surrogate.

In that post, Ballos explained how she wasn’t able to fulfil her family’s dream of having a second child, due to having chemotherapy in 2019 for cervical cancer.

Having recently lost a close cousin to cancer, Eller said her interest was instantly piqued, before discussing the possibility a few days later with her admittedly “surprised” husband.

Her subsequent offer left Ballos speechless, but the two families are now well acquainted, having shared the ultrasound of the baby and spent part of the summer camping together up north near Smithers.

Baby due in a couple of weeks

The baby, a boy, is due in a couple of weeks and this weekend Ballos, her husband and their four-year-old son, Oscar, are flying to Smithers to make sure they don’t miss a moment.

“There are no words. It’s surreal. I know this is happening, but it’s still quite hard to believe it’s happening,” Ballos told the Richmond News on Monday.

“There’s a baby coming and it’s going to change our whole life. If it happens tomorrow, we’re getting on a flight tomorrow.”

Ballos recalled how she cried in the car when Eller first called to express her interest in helping.

“My son was there and I tried to explain to him about happy tears and what surrogacy was,” said Ballos, who had her eggs removed prior to receiving chemotherapy.

“I told my husband and he was like, ‘we haven’t even met her.’ He was amazed she was going to do this for us having not met us.”

Eller, meanwhile, who has two daughters age nine and seven, admitted to the News that being a surrogate was not something she had remotely considered, before now.

She said that, once she had done her research and gotten to know Ballos, she was keen to get the ball rolling, so to speak.

“My cousin was 39 when she was diagnosed. She had two kids and I watched what she went through. She passed away last November. I was able to tell her what I was doing, before she passed.

“When I read Katya’s story, I couldn’t help but connect with it and wanted to help in some way.”

No second thoughts from surrogate mom

And despite the last nine months or so being a “tough pregnancy,” complete with severe bouts of nausea, Eller said she has not once harboured a second thought.

“I don’t regret it at all. The nausea has been difficult. Maybe it’s my age, maybe it’s because it’s not my genetics and my body is fighting it a little, I don’t know,” added Eller.

“But this has been a gift for my children, in terms of learning about selfless acts and giving without getting anything in return.

“I’ve explained that this will not be our baby and they’re good with it.”

Ballos said she and her husband will be in the delivery room for the birth and, after that, it will all be about the health of the baby.

“The baby will come out of hospital when he’s ready to go, whether that’s a few days or whatever,” said Ballos, explaining that’s when they will bring him home to Richmond.

Asked about the “transaction” itself, Ballos said there is a contract, drawn up by lawyers, but there was a “huge amount” of preparation before anything was signed.

“There are medical checks at the fertility clinic to make sure your body can do this and there is counselling all the way through, talking about what it will be like for both families,” said Ballos.

What there is absolutely not is money changing hands, other than Ballos and her husband reimbursing Eller for any expense related to the pregnancy.

As for communication down the line, Ballos said that Eller will “be part of the baby’s life. It’s not like an adoption.

“Maybe she will be Auntie Rachel or something like that. We imagine there will lots of Facetimes down the road.”

Eller concurred, saying that she thinks they will “definitely always be in touch.”

“I don’t feel like I need to be a huge part of his life, because there is no blood relation.

“I’m sure there will be some connection, but I don’t feel like I need to be super involved.”