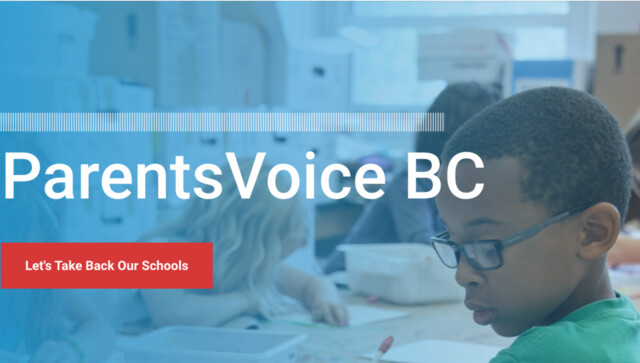 The founders of a conservative-leaning group running a slate of school trustee candidates across B.C. claim their goal is to lessen the impact senior governments, professionals and bureaucrats have on the education system.

In the Central Okanagan, candidates running under the banner include Teresa Docksteader, Tovey Demman, Christopher Fieber and Laurie Bowen.

In an interview with Glacier Media, Radandt said the group represents parents concerned their input has been swept aside by senior levels of government, which they feel have increasingly failed to prioritize core curriculum.

Radandt says the slate is non-centralized and has no policy platform other than candidates accepting a broad set of values. They include the independence of school trustees; transparency; that schools should reflect the community’s values; and that parents are primarily responsible for their child’s education.

Group looks to open up conversation around SOGI

Radandt acknowledges many candidates will oppose current efforts to educate students on sexual orientation and gender identity (SOGI). He said the slate wants dialogue on SOGI, but that the group of candidates has different perspectives on where that conversation should go.

“I know some of our candidates are freedom fighters, but most of them aren’t, right? Some of our candidates are active in church; probably most of them aren't. It's a whole range,” said Radandt, who successfully managed the campaigns of both White Rock Conservative MP Kerry Lynne-Findlay in 2021 and former Port Moody-Coquitlam MP Nelly Shin during the previous election cycle.

Radandt said all 29 candidates “had their red pill moment,” and some, such as Surrey candidate Dupinder Saran and Coquitlam candidate Daniel Westley, support SOGI policies.

Glacier Media was unable to contact Saran and Westley in time for publication.

The group's overarching issue, he said, is that parents feel they have less control over their children's education as “major changes” were carried out “with very little consultation” with parents.

On their homepage, the group calls on parents to “take back our schools.”

Beyond SOGI, Radandt said past mask mandates and COVID-19 school closures were also approved without parental input. He said ParentsVoice BC takes a more skeptical view of professional and expert input.

“It's not even a partnership anymore. It's now basically dictated, and if you don't like it, you know, take your kids out. And of course, that's what's happening and record numbers,” said Radandt, pointing to a steady rise in independent school enrolment.

Some of the group's candidates have publicly questioned measures to prevent the spread of COVID-19 in the past, often invoking conspiratorial language.

Maple Ridge candidate Brian Dominick, who protested vaccine passports in Vancouver in May 2021, has referred to the COVID-19 pandemic — which is estimated to have killed more than 6.5 million people — as the “plandemic,” a global conspiracy in which corporations lie to the public as part of a “global elitist parasite problem.”

He added: “they are the ones who need to be exterminated.”

The conspiracy theory was promoted in a documentary by the same name, and was shared tens of millions of times on platforms such as YouTube before it was removed for containing “a tidal wave of misinformation,” as the fact-checking organization Snopes put it.

“It was really a comment that's been taken out of context. I can't even tell you what it means to be honest,” said the father of two school-age children who runs an electric transportation retail outlet.

Glacier Media asked Radandt and Dominick how a ParentsVoice-led board would balance professional and expert advice, such as from engineers or public health officials, versus the views or beliefs of parents.

“If you go throughout history, the quote-unquote experts have been wrong many times,” Radandt responded.

Radandt said districts should have more autonomy to reflect local values. This could result in a splintering of provincial standards set by the B.C. government, he acknowledged.

In the case of a declared provincial emergency, Radandt said "it would be up to the community to see how it deals with the emergency."

"The reason we have 60 school boards is to reflect the different values and needs of 60 different communities, right?" asked Radandt.

Dominick said he also promotes the individual needs of students.

“One of my kids doesn't play sports at all. Do you think he should have to participate in PE five days a week versus the other kid who all he wants to do is kick a ball, right?” asked Dominick.

In the past, B.C. school districts have been known to close certain classes, such as music, when enrolment numbers don't support the available financial resources.

But ParentsVoice has yet to explain what increased personalized learning might cost and how it could be practically implemented, such as if a student wanted to drop a core part of the curriculum simply because they, or their parents, aren't interested in it.

According to the Ministry of Education, the most recent curriculum changes have already ushered in more individualized learning opportunities. One of the ministry's goals is to transform the province's curriculum in a way that “better engages students in their own learning and fosters the skills and competencies students will need to succeed."

“One focus for this transformation is a curriculum that enables and supports increasingly personalized learning, through quality teaching and learning, flexibility and choice, and high standards,” notes the ministry's website.

Dominick also claims “depression, suicide, drugs, and alcohol abuse” are at record highs “so whatever we're doing, it's not working.”