Bridge limit up after inferno 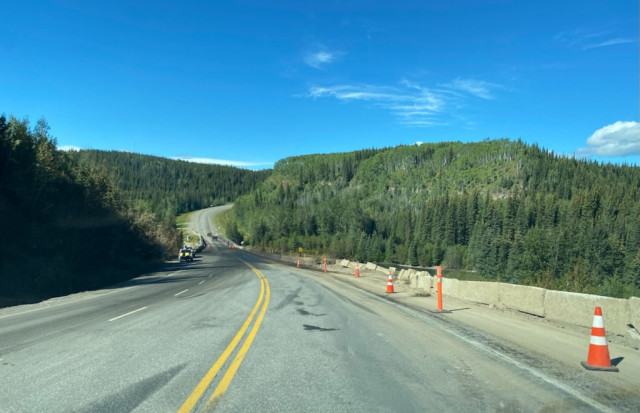 Commercial load limits have been increased over the Sikanni Chief River Bridge in the wake of a fatal tanker truck inferno.

In an update Tuesday morning, Public Procurement and Services Canada says commercial vehicles 63,500kg and under are now permitted.

The Alaska Highway over the crossing remains open to single-lane alternating traffic, with a speed limit of 30 kilometres per hour. Motorists are asked to obey signs and traffic control.

One person died after a fuel tanker crashed and exploded on the bridge Thursday, Aug. 25, causing significant damage to the bridge about two hours north of Fort St. John, and two hours south of Fort Nelson.

Initial assessments done Aug. 27 found three of the bridge’s five spans suffered structural fire damage, according to PPSC, the federal department responsible for most of the Alaska Highway through Northeast B.C.

Loads had been previously limited to light vehicles 15,500kg and under when the bridge was reopened.