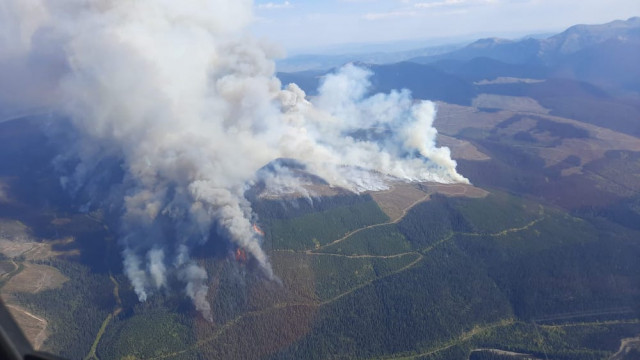 An evacuation order for British Columbia's largest wildfire has been rescinded, though the BC Wildfire Service says the blaze remains out of control.

The Battleship Mountain wildfire in the Prince George Fire Centre is now estimated at more than 302 square kilometres.

The fire in the northeast corner of the province led to an evacuation order for about 1,000 residents on Sept. 10, but the District of Hudson's Hope says that has been lifted.

The BC Wildfire Service says the blaze about 50 kilometres west of Hudson's Hope was caused by lightning on Aug. 30.

It is one of the two remaining blazes classified as wildfires of note on the service's website.

But it is reporting the Bearhole Lake fire, which is also located in the Prince George region, will be downgraded Sunday as cooler temperatures and rain continue to dampen the fire's activity.

Good news this morning from the fire fight at Battleship Mountain.

BC Wildfire Service reports most areas of the wildfire have received upwards of 10 mm of rain since Friday, and with some areas reporting nearly 20 mm.

Rain is expected to continue until noon, with another five to 10 mm forecast, according to BCWS.

That will be accompanied by cool daytime temps from 8 to 10 degrees, and northwest winds gusting up to 40 kilometres.

“Though the precipitation helps cool fire activity, the fire continues to smolder in heavier fuels,” the wildfire service said in an update. “Surface fires displaying rank one fire behaviour are expected today.”