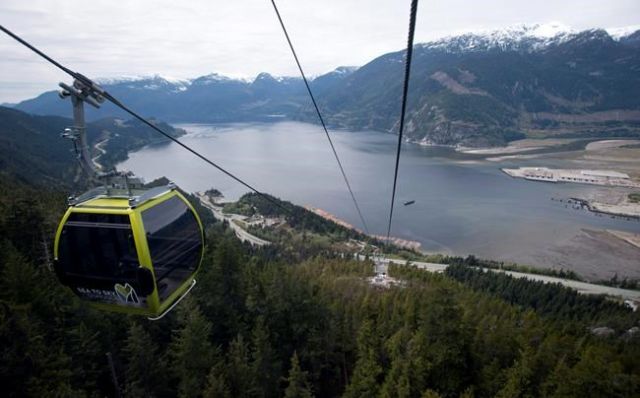 Photo: The Canadian Press
The waters of Howe Sound are seen in the background from the top of the Sea to Sky Gondola in Squamish, B.C., on Sunday, April 29, 2014. THE CANADIAN PRESS/Jonathan Hayward

The British Columbia gondola company whose main suspension cable has twice been deliberately cut has filed a lawsuit against the security company it hired to design and install a new, upgraded system after the first crime in August 2019.

A notice of claim filed in B.C. Supreme Court this week by Sea to Sky Gondola argues an alarm system designed and installed by Unified Systems Inc. failed when an unidentified person cut the cable for the second time in September 2020.

In both incidents, gondola cars on the cable that stretches 880 metres above sea level came crashing down, causing millions of dollars in damage along with lost revenue when the attraction in Squamish, B.C., had to close.

The statement of claim filed in Vancouver says the alarm was supposed to sound if an unauthorized person tried to climb one of the towers holding up the gondola's cable, but it failed because the security system wasn't receiving enough power.

The allegations have not been proven in court, and the security company has not filed a response to the civil claim.

The RCMP released a grainy photo of a suspect this week, while the company doubled its reward to $500,000 in an effort to solve the crimes.

The lawsuit alleges that the security system's failure constitutes a breach of contract and negligence by the company, saying it should have known the system wasn't operating at certain times and it should have warned the gondola operator.

Sea to Sky Gondola made clear to Unified Systems that "security was paramount" to ensure the cable would not be severed a second time, the statement says.

"Despite the vandal having approached the tower, ascended the ladder and cut the cable, each of which ought to have been detected by multiple components of the (security system) ... the alarm was not triggered at any point," it says.

Kirby Brown, the gondola's general manager, said during a news conference on Wednesday that they increased the reward with the aim of convincing anyone with information about the crimes to come forward.

The direct cost of the damage in both incidents topped $10 million, he said, noting the figure doesn't factor in benefits the attraction provides to the local economy that were lost when it was twice forced to close and replace its gondola infrastructure. The company was insured for the damage, Brown said.

In addition to the black-and-white thermal image of a person standing on or near a gondola tower, the Mounties released a video clip showing a security guard walking underneath the cable seconds before it was cut in September 2020.

RCMP Sgt. Chris Manseau said investigators believe the suspect is very physically fit, familiar with the area and knew exactly which tools to use to cut the cable while avoiding personal injury.

He said police believe it could have been the same person who severed the cable both times, but it's possible others were involved.

The lawsuit asks the court to award the gondola company general damages, special damages, interest, costs and any further relief the court may deem just, although no dollar figure was included in the statement of claim.