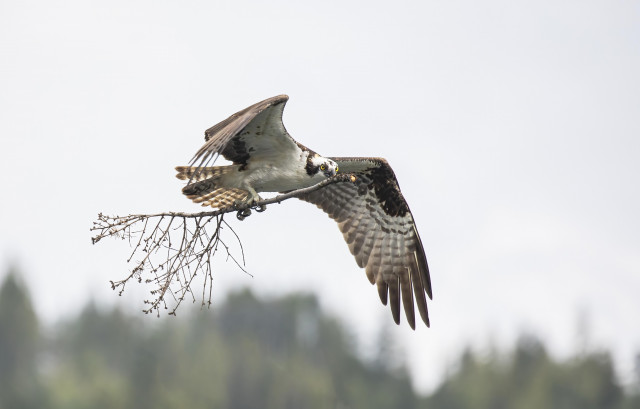 Carolyn Matt tells Castanet she has been travelling to the Interior of British Columbia from her home in Vancouver for years now and has developed a special relationship with a pair of nesting osprey near Nakusp.

"I go up to visit with my daughter and grandchildren. But between childcare and visiting, I take some time to go to Kaslo to photograph [the osprey] because they're my birds," Matt says. "I have a passion for them, I stay all day long."

Matt says she has been into photography for about a decade and one day while camping near Kaslo she spotted the osprey and fell in love.

"It's been a wonderful experience. That's for sure. It keeps you going," says Matt.

Matt takes her photographs with a Canon 5D Mark IV & L-Series lenses and she says one of the toughest parts of taking great pictures is capturing the birds in flight.

"Anybody can take a shot of something on the nest, the beautiful part of it is catching them in flight, whether they have a branch or a fish, that's when they are in their glory," says Matt.

Matt says she has been following this particular pair of osprey as they return to the same spot near Kaslo, year after year. This year there was extra drama as the bird's nest was in danger of flooding, but thanks to a concerned citizen, Ministry of Forests wildlife biologists, a retired park ranger and BC Conservation officers, the nest and eggs were successfully moved. Matt says she watched and took photos of the move and she was there when the surviving egg hatched and the young osprey eventually took its first flight.

"I mean, the end result was that last picture of the juvenile flying. It's been a wonderful experience. The family shot I sent to you know with the mom, the dad and the baby, that was kind of cool seeing them all together," says Matt.

Matt says the young osprey is now learning the skills it will need to make the journey as the birds migrate to South America for the winter and she plans to be there when the mating pair return to the B.C. Interior in the spring.

"It's the experience. It's a little bit of everything. You know, when I go out into nature, and I've got my eyes through the eyepiece, any problems you have just disappear, it's really therapeutic."