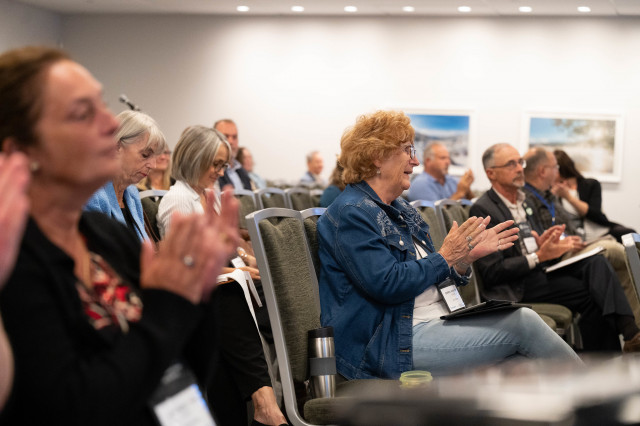 Photo: .
The annual UBCM convention is taking place in Whistler.

Three Vancouver Island municipalities say they've looked past objections made by NIMBY residents when creating housing solutions for those dealing with homelessness in their communities.

What the cities — Victoria, Port Alberni and Duncan — found as a result was marginalized people finding greater connection to their communities, better health conditions, lower crime rates and people getting jobs.

Speaking at the annual Union of BC Municipalities (UBCM) convention in Whistler Tuesday, the three mayors moved some delegates to tears.

“It sends so many important signals about who is important in our community,” Victoria Mayor Lisa Helps said.

For some years now, B.C.'s capital has struggled with how to deal with tent cities arising from increased homelessness.

Helps said when the pandemic shelter-in-place orders came, many people were stuck living on the streets. Recognizing the potential for problems, the city took over a park and created an organized tent city.

"It was the best we could do at the time,” Helps said.

Then, people began to move into motel rooms but some remained on the streets.

That’s when the idea of Tiny Town was born.

Between November 2020 and February 2021, $500,000 was raised and, with the help of community and government agencies as well as a local developer, shipping containers were moved onto a city parking lot with the capacity to house 30 people.

Helps called the accommodations modest but said the importance of having a front porch, an address and a front door created a sense of place for residents.

“People made this their home,” Helps said. “People brought plants and cookies for their new neighbours.”

But, she said, “many people don’t like it when marginalized people move into neighbourhoods.”

That didn’t phase the North Park Neighbourhood Association, she said. It worked with the creation of Tiny Town and put on events for residents. Supportive neighbours, meanwhile, set up a lending hub (a place where people an bring in items to be lent to community members).

“We are really, really struggling with a housing crisis in our community,” she said. “People are living in horrible, horrible conditions.”

Minions said just shutting the park down — as some people wanted — without looking at options to deal with the root issue wasn’t an option.

Eventually, land next to the trailer park became available. Before the park owner, who has $130,000 in fines owing, could buy the land to expand, the city jumped in and bought it. With help from organizations such as BC Housing, the city is now readying to have housing pods on the site.

“These are just sleeping pods,” she said. “The amount of money we are spending for this project is low.”

Minions added staff is focused “on creating a space where people want to be.”

Duncan Mayor Michelle Staples said making someone feel needed in a community can be as simple as buying them a cup of coffee.

That’s just what happened in her city. Staples told UBCM delegates a story of a woman who was on the streets for years after having an accident. Now, she says, she feels like she has a home and a community that cares.

“She stayed because someone gave a shit about her,” Staples said.

The community had some tent sites but then moved forward to create 34 small pod housing units. Now, there is a memorial garden as well as vegetable patches and flowers.

“We’ve got these beautiful little houses,” Staples said, noting some 600 people had opposed the plan, which nonetheless got unanimous council support.

“We know it was the right thing,” she said. “They have a place to belong.”

Staples added disturbances dropped by 50 per cent, and 79 per cent of the people involved have gained employment in the past nine months.

Some of those opposed, Staples said, complained it would be undignified for people to be living in such close quarters.