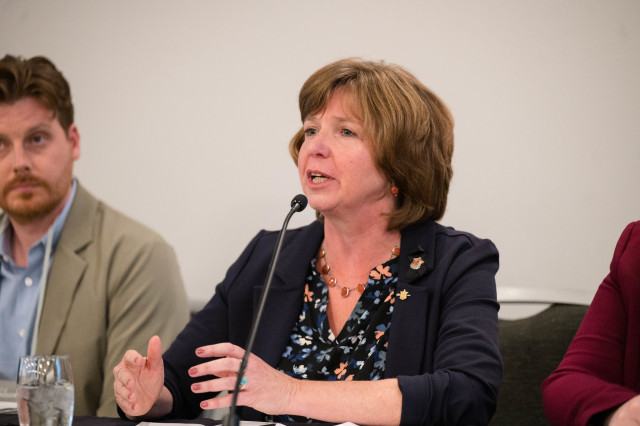 Photo: Union of BC Municipalities/Flickr.
Minister of Health and Addictions Sheila Malcolmson speaks at the UBCM on Sept. 12, 2022.

As decriminalization of small amounts of narcotics comes into force in B.C. Jan. 31, provincial officials say cooperation across all levels of government, law enforcement and health authorities is needed.

It’s necessary, they say, so those with substance abuse issues can feel less stigmatized and can get the help they need.

More than 10,000 British Columbians have died of an overdose since 2016, the year B.C. declared the crisis a public health emergency.

“There isn’t a family or a community in the province that hasn’t been affected by lost lives,” Sheila Malcolmson, Minister of Mental Health and Addictions, told delegates at the Union of BC Municipalities (UBCM) convention in Whistler Sept. 13.

“Substance use is a health-care problem, not a criminal one,” she said, noting that it is shame and fear that all too often prevent people from reaching out for help.

The federal government approved an exemption for such possession in May. Malcolmson's federal counterpart, Carolyn Bennett, made clear that the exemption is not legalization.

The substances will remain illegal; however, adults who have 2.5 grams or less of drugs — including fentanyl, heroin, cocaine, crack cocaine, methamphetamine and MDMA — for personal use will no longer be arrested, charged or have their drugs seized.

The ministry’s senior director of decriminalization Chris Van Veen said there would be no arrests under that 2.5-gram threshold.

He said there would be no mandated treatment for substance abuse issues, a statement contrary to what NPD leader hopeful David Eby made several weeks ago about people who have had multiple overdoses.

“No one is coerced or forced,” Van Veen said.

Rather, police will offer information on available health and social supports and will help with referrals when requested.

The minister noted decriminalization is only one part of the overall scheme aimed at combatting drug issues and saving lives.

“There is no evidence to tell us this will increase drug use,” said Ally Butler, the ministry’s executive director of substance use policy.

Moreover, she said, decriminalization would stop drug seizures, which could lead people to go and find ways to buy more drugs, via petty crime and survival sex.

Speakers said the exemption does not apply in various situations, including on K-12 school property, at licensed daycares, airports, on Coast Guard vessels and helicopters, among Armed Forces members with a code of service and for operators of motor vehicles and watercraft.

Abbotsford Police Chief Mike Serr has been involved in dealing with drug abuse issues since his time as a beat cop on Vancouver’s Downtown Eastside years ago. He’s remained part of groups seeking solutions.

He raised the issue of public consumption once decriminalization becomes a reality.

Serr said police have legislated tools to deal with public consumption of alcohol and now cannabis but none to assist in public use of the drugs falling under the exemption.

He also cautioned about continued issues with organized crime.

“They will always look for loopholes and advantage,” he said. “We need to be ready for that.”