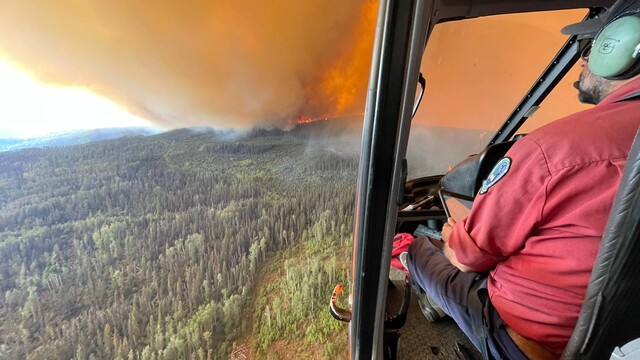 All of Hudson's Hope has been evacuated due to the massive Battleship Mountain wildfire, displacing 800 residents.

The District of Hudson's Hope had previously declared a State of Local Emergency, and the Peace River Regional District has upgraded its Evacuation Alert to an Evacuation Order.

The City of Fort St. John has set up an Emergency Support Services (ESS) centre at the North Peace Arena. All residents, even if they have family or friends they're staying with, should contact the ESS at (250) 794-3310 to confirm they are safe and evacuated.

As of Sunday, there are currently 65 firefighters as well as five night operations staff, and 47 structure protection personnel, six of whom are working overnight.

Structure Protection crews will continue working on setting up structure protection apparatus in priority areas today, including within Hudson’s Hope and on critical infrastructure. Crews are working closely with the Hudson’s Hope Fire Department.

Temperatures are forecasted to increase into the weekend and there is no measurable amount of precipitation expected. Increased fire behaviour can be expected as temperatures and wind increase.

The largest wildfire burning in the province continues to grow rapidly, moving an incredible eight kilometres on Saturday alone. And its recent growth has forced the evacuation of nearby Hudson's Hope and surrounding areas.

Saturday evening, the District of Hudson's Hope and the Peace River Regional District issued evacuation orders for all properties within the district, in addition to areas surrounding the district.

The municipality has a population of just under 1,000 people. Evacuees can proceed to a reception centre in Fort St. John, about an hour to the east.

“Structure protection personnel remain on site and are working rapidly to reinforce and install fire apparatus. BC Wildfire personnel continue to monitor fire behaviour overnight and will be ready to respond as required.”

Crews are also working to protect the nearby WAC Bennett Dam.

The BCWS notes that temperatures are forecast to increase, and there is no precipitation expected in the near future.

“Increased fire behaviour can be expected as temperatures increase,” the BCWS says.

There are currently 65 BCWS firefighters working on the large fire, along with 47 structure protection firefighters. Twelve helicopters are being used, along with 16 pieces of heavy equipment.