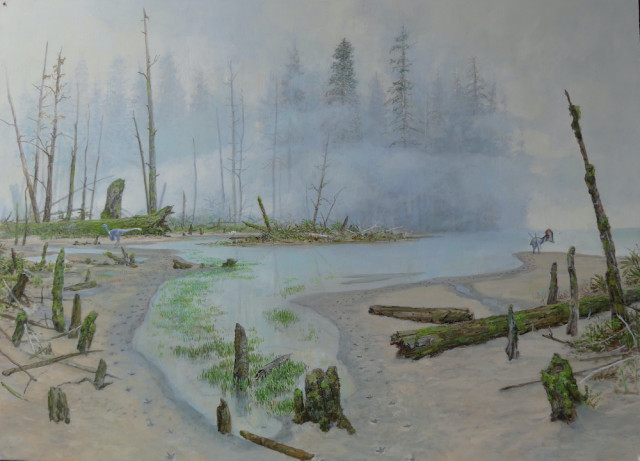 This dreamlike painting by artist Jan Vriesen imagines what the environment was like in the Tumbler Ridge area of Northeast B.C. some 112 million years ago.

It was the ‘Age of Dinosaurs’ and the steep slopes in the valley of Ninesting Creek, a tributary of Wolverine River southwest of the community, were likely at the edge of an open lake basin or floodplain pond.

Researchers say they’ve finally identified a set of “unusual” fossilized trackways discovered there in 2014, believed to be among the largest and oldest of their kind in Canada and North America.

The findings were recently published in the scientific journal Cretaceous Research, and shared by the Tumbler Ridge Museum this week.

The museum says three "distinct" track types were found within a lease area of the Quintette Mine: large three-toed bird tracks, larger four-toed dinosaur tracks thought to have been made by oviraptosaurs, and pterosaur tracks.

"The pterosaur tracks are arguably the first to be identified in BC, although such tracks have been found in Alberta, Alaska, and the western USA," the museum said in a news release. "They appear to be the oldest thus far identified in Canada."

The three-toed bird tracks, the museum said, are “the largest from the Mesozoic Era (the ‘Age of Dinosaurs’) in North America, and among the largest in the world from this time period."

“At the time the tracks were made, the area was likely at the margin of an open lake basin or a floodplain pond.

“Traces made by freshwater mussels were also present on the surface, suggesting that the birds, oviraptosaurs and pterosaurs might have been interested in a meal of molluscs.

"At the time the area would have been located close to the Arctic Circle, with long periods of winter darkness.”

Twenty tracks in all were identified in six different trackways at the site, of which mine operator Teck Resources "was extremely helpful in supporting the research and enabling site access," the museum said.

“The discovery confirms the importance of northeastern BC as an area rich in fossil tracksites.”

Professor Emeritus and geologist Martin Lockley of the University of Colorado was lead author of the article. He was supported by Charles Helm, Andrew Lawfield, and Kevin Sharman of the Tumbler Ridge Museum.

The museum says the 2014 trackway discovery is among more than 70 vertebrate tracksites identified in the Tumbler Ridge UNESCO Global Geopark.

More than 400 million years of Northeast B.C. history is housed and displayed at the museum, and the Geopark is also home to 75-million-year-old tyrannosaurid trackway.