1,000 unionized workers off the job at Seaspan

Seaspan workers off the job 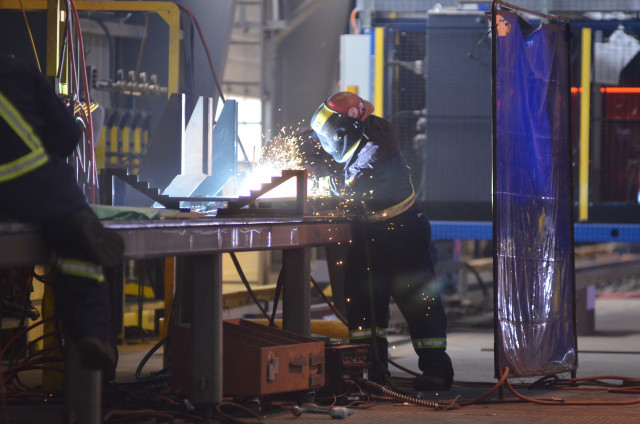 Photo: Paul McGrath, North Shore News.
A welder works on a section of a ship at Vancouver Shipyards in July.

More than 1,000 people, including welders, pipefitters, electricians and a host of other trades, are usually at work at the North Vancouver shipyards, where construction on two massive Navy joint support ships and an offshore science vessel for the Coast Guard are underway.

But those workers have refused to cross picket lines since Friday.

Pickets are also up at Vancouver Drydock, another division of Seaspan based in North Vancouver.

The labour dispute at the huge marine company began last month, when unionized tugboat captains walked off the job on Seaspan tugs over a contract bargaining dispute with the company.

The Canadian Merchant Service Guild represents ships’ captains and engineers who work on tugboats that provide assistance to ships docking in the port as well as on barges throughout the south coast. Their contract expired in 2019.

The union posted a notice on its website Aug. 25 announcing contract negotiations with Seaspan’s marine transport division had reached an impasse and a strike was beginning at noon that day.

A Labour Relations Board decision issued Sept. 1 allowed striking tugboat workers from the marine division to set up picket lines preventing shipyard workers from reporting to work. Since then, “virtually no union employees have reported to work at Vancouver Shipyards,” said Seaspan spokesperson Ali Hounsell.

The company plans to challenge the labour board ruling, she added.

Meanwhile, some unionized workers at the shipyard joined the striking tugboat crews on the picket lines to show their support this week.

Neither the Canadian Merchant Service Guild representing the striking tugboat crews or Seaspan has commented on what the sticking points are in the dispute.

Workers at the picket line indicated the contract dispute is mainly over wage increases.

If the work stoppage continues for any length of time, it could spell further delays for the federal shipbuilding program at Seaspan, which has already been plagued with setbacks.

At the end of June, Ottawa announced that the expected delivery date for both joint support ships has been pushed back by two years – the latest of several such timeline revisions. The first ship is now expected to be delivered in 2025, while the second ship won’t be finished until 2027.

The tugboat strike has also caused some delays to movements of freighters and cruise ships in the Port of Vancouver.

At the end of August, four cruise ships and three bulk freighters in the port were prevented from leaving or arriving at port on time or getting bunker fuel when expected, according to the Port of Vancouver.

At one point, around 2,500 passengers on board the Celebrity Eclipse, which was delayed leaving the port, vented their displeasure at the delay on social media, saying they were being held ‘hostage’ on the ship.

The problem was apparently caused after Seaspan workers left a barge tied up to the huge ship, then refused to move it.

The issue was eventually resolved.

There was no word this week on other movements around the port that have been impacted by the strike.

A port authority spokesperson said the port “continues to work with multiple parties, including Transport Canada, toward swift resolution of operational delays.”

About 14 ships a day require escort and berthing help from tugboats in the Port of Vancouver, and Seaspan is one of four tug-assist providers and one of two bunker suppliers in the port.