Removing English Bay Barge not as easy as it looks, report shows

The bureaucracy of a barge 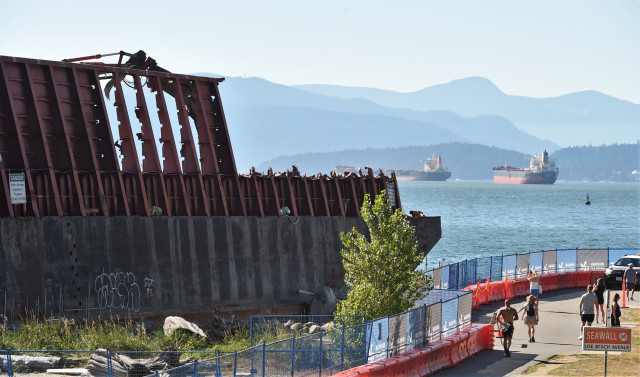 The deconstruction and removal of the stranded barge at Vancouver's Sunset Beach was originally expected to be over by mid-July, according to a late-April version of the contractor’s schedule.

The milestone summary, obtained under freedom of information from Vancouver City Hall, shows that the project was to begin May 9 with site fencing and to finish with demobilization July 14. At the time, city hall, prime contractor Vancouver Pile Driving Ltd., barge owner Sentry Marine Towing Ltd. and claims adjuster Coast Claims were negotiating a licence agreement.

Safety barriers and fences, however, were not erected until the end of June, with an expected 12-to-15 week timeline.

A letter from a Department of Fisheries and Oceans official and hazardous materials and environmental assessment reports commissioned by Vancouver Pile Driving offer a glimpse into the history of the barge, the damage when it ran aground in a Nov. 15 windstorm and the challenge to safely take it apart.

In a Jan. 31 response to the initial proposal, Vance Mercer, section head of the DFO’s Fish and Fish Habitat Protection Program, said the completion date had yet to be determined, but in-water works were anticipated to occur partially outside the “least risk window” for Burrard Inlet, Aug. 16-Feb. 28.

“Please be aware that the likelihood of encountering fish during sensitive life stages is higher outside of the window of least risk,” Mercer wrote.

Mercer’s letter included 19 recommendations. The top priority was to complete the project in a timely manner, so as to minimize the amount of work and risk of breaking the Fisheries Act. The list also recommended hiring an on-site, qualified environmental professional, working during daylight and weather that allows visual observation of fish and marine mammals, ceasing work if fish spawning is observed or cetaceans come within a 500-metre exclusion zone, monitoring of water quality, and development of plans for debris management, sediment control, and spill prevention and response.

“Provided that you incorporate these measures into your plans, the program is of the view that your proposal is not likely to result in the contravention of the above mentioned prohibitions and requirements,” Mercer wrote.

The Orca Health and Safety hazardous materials survey from February said there were breaches of the hull in at least three places. Testing found lead throughout the hull and bulwarks and diesel oil and hydraulic fluids. Copper and zinc were presumed in the hull underwater. No asbestos, volatile organic compounds or PCBs were found, but materials that were detected needed to be removed or contained prior to demolition.

“The presence of lead in the vessel’s paint systems is considered to pose a moderate to high risk to workers during breaking,” said the Orca report.

The 84-metre long barge was built in 1968, originally as the Foss 275 by Zidell Explorations Inc. in Portland, Ore. and rebuilt and converted into a bin barge in 1987. It is now officially known as STM-5000.

The Jan. 28 marine habitat assessment report by Hatfield Consultants LLP said the barge sits atop several manmade boulder clusters and was irreparably damaged. Three temporary steel pilings would be necessary to secure the barge and airbags to elevate sections above the waterline to allow for cutting during the on-site deconstruction.

“Salvage works will involve the removal of concrete decking, steel bin walls, steel decking, and the steel hull,” said the Hatfield report. “One small engine exists within an engine room located at the bow centreline of the barge. This engine and all associated hydrocarbons will be removed by a mechanic prior to disassembly works.”

The report said pile driving, relocation of boulders and cutting of the barge have the potential to affect fish and fish habitat, by disturbing sediment, accidental spills of fuel and oil, increased noise and light and accidental killing of fish or wildlife through direct contact.

“The barge, in its current position, is occupying marine habitat on the seabed and in the water column, so the priority is to remove it and, if necessary, restore the habitat beneath it. If the measures proposed in the [Environmental Management Plan] are implemented and followed, Hatfield is of the opinion that the project is unlikely to directly or indirectly result in [Harmful Alteration, Disruption and Destruction] or death of fish.”

After it is removed, the temporary piles will be removed, salvage equipment demobilized and fencing taken down. A crane magnet will sweep the beach for debris at low tide.

“Project works will be followed by a post-construction habitat survey to assess the condition of the habitat at the wreck site and inform potential restoration activities, if required,” said the Hatfield report.

That final step, according to the milestone summary, is expected in May 2023.

City hall’s key contact on the project, business planning manager Harry Khella, refused to comment, referring a query to the communications department. Spokeswoman Krystyna Domes said nobody was available for an interview.

Likewise for Vancouver Pile Driving project manager Ian Purvis and design build director Jesse Percy. Public relations contractor Jenn Wint referred a reporter to Purvis’s weekly video, which said the excavator was just removed and scaffolding erected. Concrete deck removal was completed last week and torch-cutting of the bow began. Removal of the forward and aft rakes will allow workers to enter the mid-body of the barge, “which will be a more complex demolition due to the tides,” Purvis said in the weekly video update.