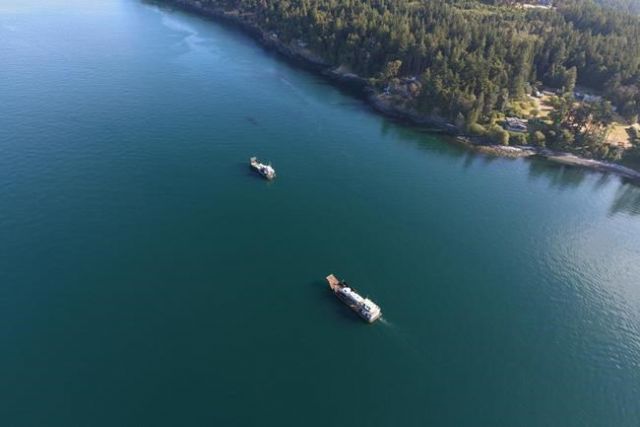 Photo: The Canadian Press
Response vessels with a vacuum trucks on board are shown off San Juan Island, Washington.

Crews are working to drain fuel from a sunken fish boat in U.S. waters just east of Vancouver Island before it fouls a key feeding ground for endangered southern resident killer whales.

An update from the U.S. Coast Guard says the 15-metre Aleutian Isle has shifted since it went down Saturday off Washington state, near San Juan Island, roughly 25 kilometres east of Victoria.

The vessel, loaded with about 10,000 litres of diesel and oil, was originally resting in about 30 metres of water, but U.S. officials say it is now some 60 metres below the surface.

The coast guard says the added depth presents more logistical challenges that the on-scene dive team is working to resolve.

Divers are also trying to gather and remove a large fishing net that has floated free of the wreck and the Coast Guard update says officials are watching the area closely even though no marine mammals have been reported nearby.

The stretch of Haro Strait where the Aleutian Isle sank is a protected area considered critical habitat for the 74 remaining southern resident killer whales and, although the pods were last spotted just 50 kilometres away, the whales were believed to be moving west, away from the sunken vessel.

An oil sheen estimated to be several kilometres long now covers waters west of San Juan Island and U.S. officials say it has moved into Canadian waters east of Victoria.

About 640 metres of boom had been laid by Monday night, the Coast Guard said in its latest release, and drones were being used to monitor the sheen and watch for any marine mammals.