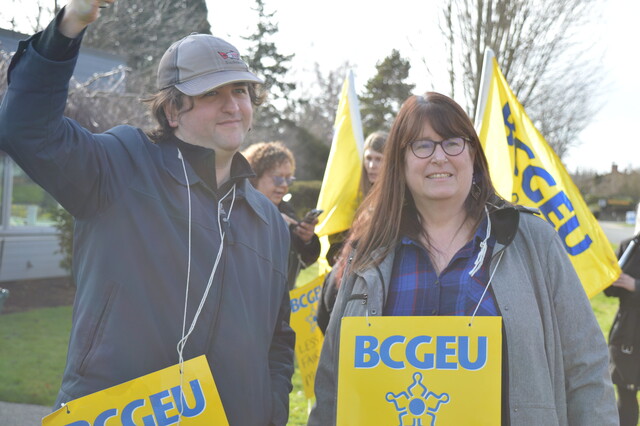 The BC General Employees’ Union will start job action in a very limited manner on Monday afternoon.

While the BCGEU — which issued strike notice on Friday — represents 33,000 members in the provincial public service, just four job sites are walking off the job today.

BC Liquor Distribution Branch wholesale and distribution centres in Kamloops, Delta, Richmond and Victoria are being picketed. Staff from a LDB customer service centre in Burnaby will also join the lines.

All other members of the B.C. public service, including those working at BC Liquor Stores, are being told to report to work as usual.

Union members have been without a contract since April 1, and while bargaining started on February 8, it reached an impasse on April 6.

Ninety-five per cent of members voted to support job action on June 22.

Since taking that strike vote, the union has been in negotiations with the province over who are deemed essential service workers. The union told members last month the employer’s aggressive essential service claims had been limiting their ability to strike effectively.

The government has said it is offering a wage increase of nearly 11 per cent over three years, while the union is pushing for more in the face of the annual inflation rate of 8 per cent.

“Our members have been crystal clear since day one that their priority this round of bargaining was cost of living protection for their wages,” said Stephanie Smith, BCGEU president and chair of the union’s public service bargaining committee.

The Hospital Employees Union of BC announced Friday it is pausing its own contract negotiations with the government in support of the BCGEU.