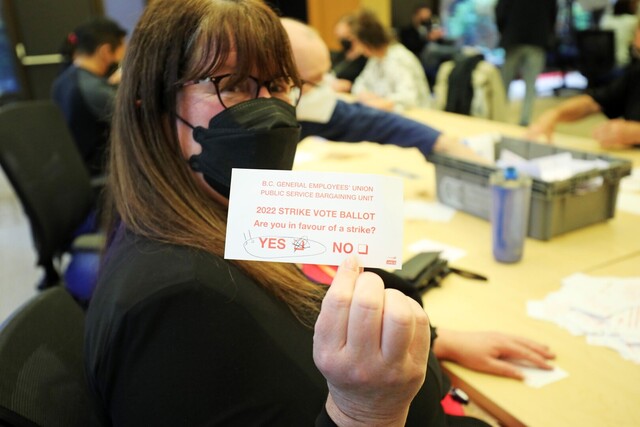 The BC General Employees' Union has served the government with 72-hour strike notice.

The union representing 33,000 members who work for the provincial government will be in a legal position to strike as of 2:46 p.m. on Monday.

The union is not releasing details about the job action at this time.

Members are being told they will be contacted over the weekend if their site has been selected for job action.

Union members have been without a contract since April 1, and while bargaining started on February 8, it reached an impasse on April 6.

Ninety-five per cent of members voted to support job action on June 22.

The government has said it is offering a wage increase of nearly 11 per cent over three years, while the union is pushing for more in the face of the annual inflation rate of 8 per cent.

The union says earlier this week the employer invited the union back to the bargaining table. After “exploratory discussions,” the union’s bargaining committee unanimously decided a return to the table “would not be fruitful at this time.”

“Our members have been crystal clear since day one that their priority this round of bargaining was cost of living protection for their wages,” said Stephanie Smith, BCGEU president and chair of the union’s public service bargaining committee.

“The bottom line is they’re not asking for anything that MLAs don’t already have. The strike vote in June and issuing strike notice today is a message to government that our members are serious.”