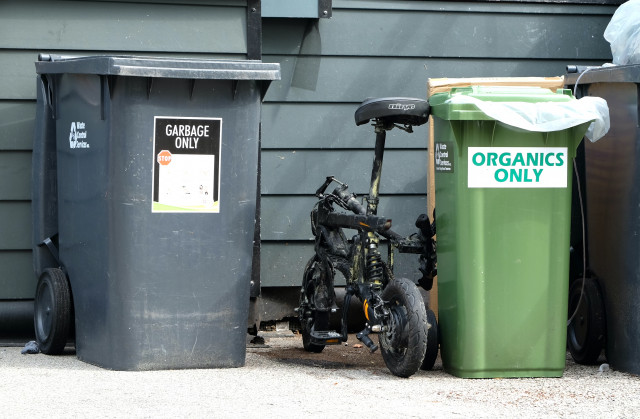 Photo: Photo Mike Howell.
Firefighters have determined that this electric bike was being charged with a lithium-ion battery when it caught fire early Wednesday morning inside a suite at the Aneki Housing for Women on Powell Street.

A Vancouver non-profit housing provider says four of its buildings in the Downtown Eastside were damaged in fires over the past three weeks because of people charging lithium-ion batteries for electric bikes.

No injuries were reported in the fires, but in some cases tenants had to be temporarily relocated because of smoke, structural and water damage in the buildings, which are home to low-income people.

The spate of fires concerns Janice Abbott, CEO of Atira Group of Women Serving Services. She believes none of the several dozen buildings it manages in Vancouver had ever previously caught fire because of problems associated with lithium-ion batteries.

“We do have a fire every four days across our portfolio, but these four in the last three weeks are the first that we're aware of that were caused by lithium-ion batteries,” says Abbott, noting the agency recently banned the batteries from tenants’ rooms, but acknowledged the policy is difficult to enforce.

“It's better than doing nothing, but the reality is we're unlikely to be able to enforce it 100 per cent because we’re not going to be searching people's backpacks every time they come in. That would probably be a human rights issue at some point.”

The most recent fire occurred early Wednesday in a suite at Aneki Housing for Women at 535 Powell St., where a guest of the tenant had been charging an electric bike. Staff was seen removing the charred and twisted bike from the building later in the morning.

Abbott’s information from staff was the guest was not charging the original or standard battery for the bike, which is consistent with Vancouver Fire Rescue Services’ concern that fires are occurring largely because chargers are being modified, or batteries tampered with from their original state.

In June, a man identified by residents as Shayne Charleson died after a lithium-ion battery exploded in his room at the Empress Hotel, near Main and Hastings streets. Charleson fell to his death in the alley below.

Capt. Matthew Trudeau, public information officer for Vancouver Fire Rescue Services, said there has been a total of five fire deaths this year related to the batteries. Trudeau didn’t have all locations before deadline, but said the trend concerns firefighters.

“We're seeing these a lot in SROs where people are modifying these chargers, and then when it gets that incorrect voltage, it causes overheating, shorting and then these things just explode,” said Trudeau, noting firefighters have reached out to housing operators about the dangers of the batteries.

“So people are modifying the chargers, but we are seeing a high occurrence with just lithium-ion batteries failing overall, as well.”

The three other battery-related fires reported by Atira occurred at the Patricia Hotel at 403 East Hastings St., at a small housing complex at 566 Powell St. and at the Nora Hendrix temporary modular housing building at 258 Union St.

The fire at the Patricia was reported late Monday night. Four people were temporarily relocated from seven rooms because of damage to the building, which has been home to many former residents of the Strathcona homeless encampment.

Tenant 'shaken up' by fire

In the fire at Aneki, the tenant was moved into a vacant space in the building until her room could be cleaned up and deemed safe to occupy. Electrical crews were at the building Wednesday to inspect the suite for damage.

Taylor Bawn of Lux Electric said there was minor damage to the area where the bike was being charged and to the electrical panel. Water damage, Bawn said, was evident on the floors below the second-floor suite.

“The water tends to get everywhere when they put these things out,” he said from the sidewalk outside the building. “There's a lot of standing water in the hallways and stuff like that.”

Added Bawn: “I saw the tenant and she seemed fine. Just a little shaken up from having to move all her stuff, which got all wet.”

Bawn said he and his co-worker, Max Chambers, have responded to more calls recently in Vancouver and Surrey involving fires caused by lithium-ion batteries, largely in modular housing and single-room-occupancy buildings.

“I would say mainly because of scooters and bikes,” Bawn said. “I don’t know if it’s the batteries just get so hot that they melt the charger and then start the fire, or what's going on. But yes, it’s definitely these [electric] bikes and scooters that are causing it.”

The shift in recent years to people using electric bikes and scooters is noticeable throughout Vancouver, particularly along bike routes. Chambers noted he just purchased an electric scooter but said he isn’t worried about it exploding, or catching fire.

“It’s a top-of-the-line Segway Ninebot and Segway has been around for a long time, and I trust their company and hopefully my apartment won’t burn down,” he said.

198 SRO fires in Vancouver this year

Abbott says her staff have been doing research on whether steel boxes would be available to allow for batteries to be charged, noting bikes and scooters are a mode of transportation for some tenants.

She also suggested the City of Vancouver provide safe and secure storage for electric bikes and scooters, particularly at old, crowded and wood-constructed single-room-occupancy buildings; Vancouver Fire Rescue Services says 198 fires occurred at SROs this year, although data wasn’t available on how many were linked to batteries.

In the meantime, all Atira’s building have set up large posters from the fire department that warn of the dangers associated with the batteries, including cautioning people to be to sure use the battery designed for the device and not to modify the battery.