Is your plate peeling? 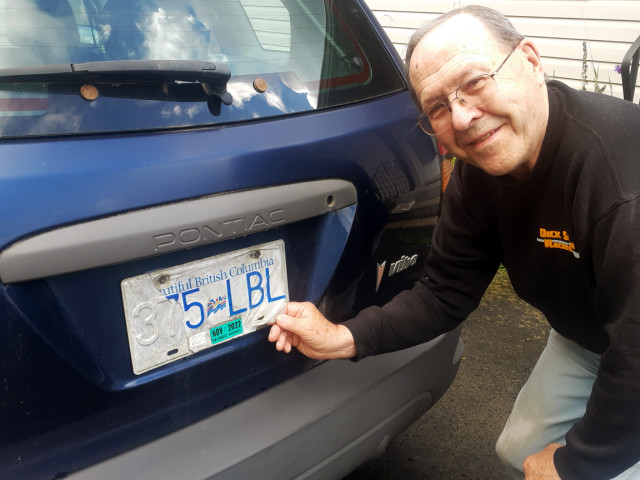 Photo: Ted Clarke.
Dave Muirhead of Prince George shows the peeling licence plate he has on his 2004 Pontiac. B.C. drivers with peeling plates should visit an Autoplan broker for a free replacement as soon as possible to avoid a $230 fine.

Dave Muirhead first noticed his peeling licence plates about a year ago.

The Prince George resident is among thousands of B.C. drivers whose licence plates have delaminated and peeled off, leaving the plate identification numbers and letters unreadable from a distance.

“The car is a 2004 and that’s probably when I got the plates,” said Muirhead.

“I wondered about it when I first noticed it but it’s a lot worse now, or course.”

Muirhead, 79, has been driving for decades and this is the first time he’s ever noticed a plate not standing up to the test of time.

“They must be making them differently, that’s for sure,” he said.

“I’m a little worried about it, if there’s a fine.”

Muirhead was not aware of the fact he could be subject to a $230 fine for driving with a defective plate, as stated in Section 3.03 of the Motor Vehicle Act regulations. Drivers are responsible to replace lost, stolen or damaged plates on their vehicles.

According to the provincial law: “A number plate must be kept entirely unobstructed and free from dirt or foreign material, so that the numbers and letters on it may be plainly seen and read at all times and so that the numbers and letters may be accurately photographed using a speed monitoring device or traffic light safety device prescribed under section 83.1 of the Act.”

Insurance Corporation of B.C. (ICBC) spokesperson Greg Harper says customers with delaminated plates should visit an Autoplan broker to obtain a replacement plate free of charge and do so as soon as possible to avoid a fine.

Waldale Manufacturing in Nova Scotia makes the plates used on B.C. vehicles. Harper said our province is not the only one affected by the problem.

“Licence plate delamination has been occurring across North America,” Harper said, in an email to the Citizen. “In B.C., delamination has occurred with plates manufactured primarily from 2007 to 2012. We’re encouraged that fewer B.C. plates have been affected in recent years.

“We apologize for any inconvenience this has caused our customers.”

In March, ICBC announced it is discontinuing the use of licence plate decals, which indicate the day an insurance policy expires. The change took effect on May 1 and all customers with new policies or renewals have not had to attach decals to their plates.

ICBC is also encouraging eligible Autoplan customers to renew their insurance and registration through a new online system. Drivers can now print their own registration forms and insurance documents on plain white paper using their own printers.

ICBC will continue to update electronic records of insurance and vehicle registration for law enforcement agencies and others authorized to obtain that information.