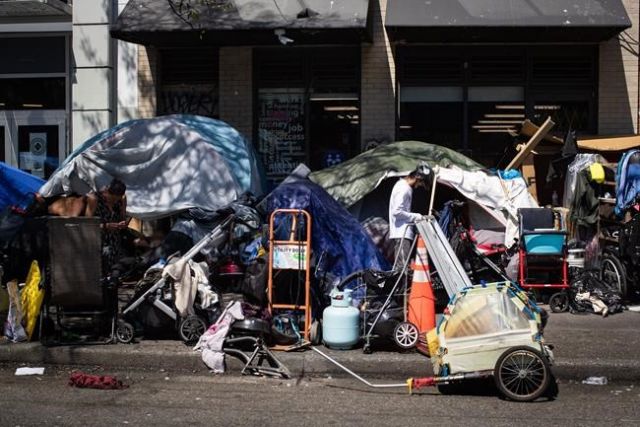 People living in a growing street encampment along a busy street in Vancouver's Downtown Eastside have been handed notices advising that the tents and other structures are about to be removed.

The notice from the City of Vancouver says removal would first focus on the highest risk areas, adding in a statement that the process would begin today and continue for weeks.

The city's fire chief issued an order last month requiring the tents be cleared because of an extreme fire safety hazard.

Advocacy group Pivot Legal Society says clearing the community will violate a pact signed by the city, the province and Vancouver's park board to ensure supports for those without shelter.

It says in a statement the city created the deteriorating conditions in the encampment by failing to provide promised storage, hygiene facilities and garbage disposal, but is now citing those safety and health concerns as the reason for the forced removal.

Pivot calls on Vancouver to provide "livable, dignified, and accessible housing," and for the fire department to acknowledge the unique needs of encampment residents by creating a harm reduction approach to fire safety that accounts for challenges ranging from toxic drugs to police violence and trauma due to colonization.