The Thompson-Nicola Regional District is lifting some evacuation alerts previously put in place due to the Nohomin Creek wildfire near Lytton.

According to the TNRD, evacuation alerts have been downgraded to all clear for about 55 properties in Electoral Area I (Blue Sky Country).

This includes all TNRD properties north of Lytton along Highway 12, and all properties on the west side of the Fraser River and north of the Stein River until the border with the Squamish-Lillooet Regional District.

Properties located west of the Fraser River, north of IR27 and south of IR97B along Spencer Road have also been given the all clear.

Further information, including a map of the properties with lifted evacuation alerts, can be found on the TNRD website.

The BC Wildfire Service said on Friday that the Nohomin Creek wildfire, which was sparked northwest of Lytton, is exhibiting diminished fire behaviour due to this week's cooler weather. 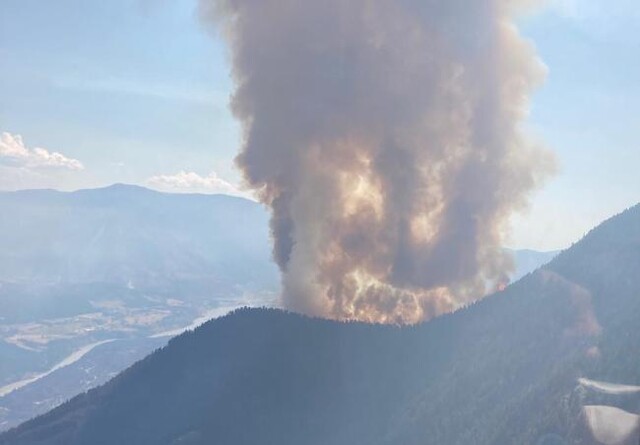 The Nohomin Creek wildfire near Lytton is exhibiting diminished fire behaviour in the Stein Valley.

In a Thursday night update, the BC Wildfire Service says the fire is burning on steep cliffs and rocky terrain that ground crews can't access.

Despite reduced activity, there will continue to be smoke and active fire within park boundaries, BCWS says.

Precipitation and cooler temperatures have reduced fire behaviour, however, temperatures are forecast to return to above seasonal levels this weekend, and burning conditions are expected to return to what was experienced in late July.

The fire has slowly advanced to just 1.7 kilometres northwest of Lytton, on the west side of the Fraser River.

It remains estimated at 3,700 hectares in size.

On the fire's east flank, crews are patrolling and mopping up hot spots.

To the north, they are maintaining a sprinkler system for containment line reinforcement north of Seven Mile Creek.

In the south, crews are patrolling and mopping up along the fire’s perimeter between Stryen Creek and Nohomin Creek and continue to establish containment lines.

The fire is suspected to be human-caused and remains under investigation.

Forty two firefighters are assigned to the fire, supported by 10 helicopters.