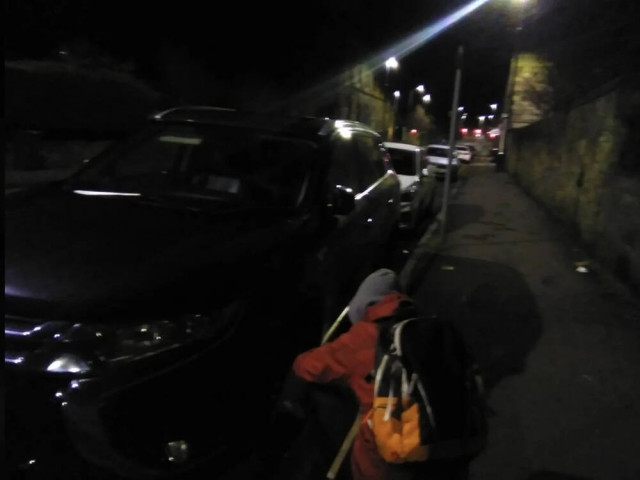 An environmental group that deflates the tires on SUVs claims to have hit 34 vehicles in Oak Bay and Victoria.

The group calls itself “Tyre Extinguishers” and claims to operate worldwide, saying the large vehicles “serve no purpose” in urban areas, and that “SUVs are more detrimental to our climate than people might realize.”

It even claims that the group’s deflating actions have worked to “reduce sales of SUVs without harming anyone.”

Local police said at least 11 cases have been reported: nine in Oak Bay and two in Victoria.

On July 29 and 30, Oak Bay police received calls for mischief to vehicles in the 500 block of Victoria Avenue, 2000 block of Quimper Street, 2100 block of McLaren Avenue and the 900 block of Falkland Road.

“In each file, the suspect targets SUVs and deflates a single tire on each vehicle,” Oak Bay police said in a statement. “A leaflet was left behind by a group called the Tyre Extinguishers who target SUVs and claim the use of SUVs has a disproportionate impact on the climate crisis.”

Oak Bay police said a man observed by a vehicle owner early on July 29 is a possible suspect.

The man is described as white and in his early 20s with a thin build and light-brown hair. He was seen driving away in a light blue car.

No licence plate was obtained by the witness, said police, and no other damage was caused.

Bowen Osoko, spokesman for Victoria police, said analysts are investigating two reports “possibly related to their claims” but did not indicate locations.

“Deflating or partially deflating a vehicle tire is dangerous,” Osoko said. “There’s a wide spectrum of possible outcomes, all depending on what occurs in each individual circumstance.”

“We know some people will be frustrated, upset, and/or angry at us,” Tyre Extinguishers said in a statement. “Unfortunately, we do not have any time to waste in reducing our emissions. The people whose tires we have deflated will be inconvenienced, but ultimately, will be able to get around by using public transit, walking, or cycling like so many other residents of Victoria and Oak Bay do.”

On Twitter, the group says the Greater Victoria action was the first of its West Coast chapter, with more to come in other major cities, including Vancouver.

The group started in the United Kingdom, but has since spread to major cities in the U.S., and now Canada.

Victoria police said anyone caught deflating tires would be subject to mischief charges under the criminal code.