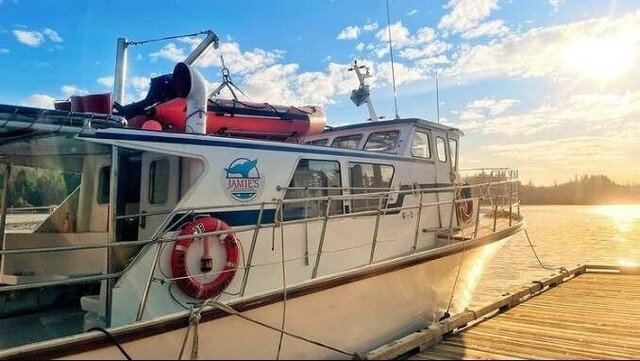 Twenty-one passengers and three crew members had to be taken off a whale-watching vessel after it started taking on water off the west coast of Vancouver Island on Saturday.

The 15-metre MV Chinook Princess, owned by Jamie’s Whaling Station, either hit a rock or came into contact with a submerged log near Turret Island in the Broken Group Islands, southeast of Ucluelet, at 11 a.m., said general manager Adam Doolittle.

“This contact led to a small leak in the rudder seal, which was successfully managed by the onboard pumps,” said Doolittle.

He said the crew assessed the damage and contacted the Canadian Coast Guard with a distress call.

Steve Payne, a member of the Royal Canadian Marine Search and Rescue 38 station based out of Ucluelet, said several vessels were involved in getting passengers off the boat and safely to shore, including RCMP, the Canadian Coast Guard’s Cape McKay out of Bamfield, and a Parks Canada rescue boat.

The Canadian Coast Guard said there were several other “vessels of opportunity” that answered the distress.

Payne said the whale-watching vessel was taking on water and disabled, but “the pumps were keeping up.”

There were no injuries and “the whole rescue went like clockwork,” he said.

The Chinook Princess was towed into Ucluelet Harbour on Saturday afternoon, after passengers had been offloaded.

Doolittle thanked everyone who helped to rescue the passenger’s and crew and credited the crew’s safety training for preventing the situation from escalating.

“These exact situations are the ones our crew frequently train for with our routine safety drills,” he said.