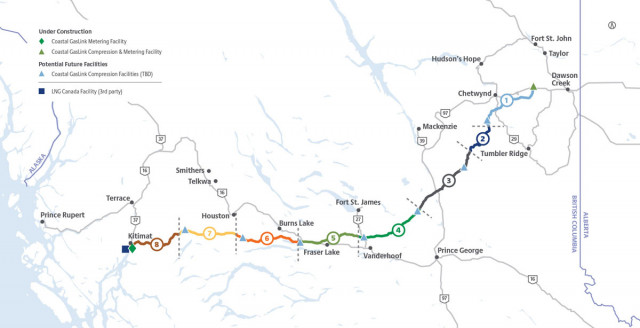 Construction of the Coastal GasLink natural gas pipeline is expected to ramp up to peak construction, according to information released by TC Energy on July 28.

There were 4,923 workers on the project as of June 30, and that number was expected to increase to more than 6,000 over the summer months, according to the company. Once complete, the roughly 670-kilometre-long natural gas pipeline will deliver up to 2.1 billion cubic feet per day of natural gas from northeast B.C. to the LNG Canada liquified natural gas export terminal under construction in Kitimat.

“Our prime contractors are mobilizing crews to various sites to continue to progress our most important construction season yet,” a statement issued by the company said. “At the end of June, Coastal GasLink was 66 per cent complete overall and now approaching 70 per cent overall completion.”

Construction of the Wilde Lake Compressor Station is nearly 90 per cent complete. Once operational, the Wilde Lake facility, located at Groundbirch west of Dawson Creek, will be TC Energy’s largest compressor station.

Section 4 of the project, running 93 km from north of Prince George to north of Vanderhoof, was complete as of June 30.