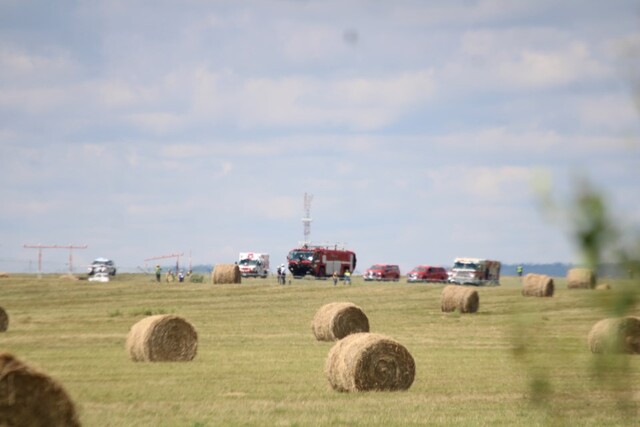 Emergency crews converged in a hay field southeast of the North Peace Regional Airport shortly after 12 p.m. following the crash.

Major Trevor Reid with the Snowbirds team says the CT-114 Tutor suffered what’s being called a "hard landing" while taking off from the airport. The pilot was not physically injured and was being checked on by a medical team.

"The aircraft did have a hard landing and the sole occupant, the pilot, did not suffer physical injuries but is being medically assessed as per RCAF policies," said Reid.

The Snowbirds demonstration team was in town for the return of the International Airshow over the weekend.

Most of the team has since flown to Penticton for a performance there, however, on Tuesday afternoon there was one intact Snowbird plane seen on the tarmac where they had staged for the airshow.

Reid said its too early to determine the status of the Snowbird still at the airport as well as the team’s scheduled appearance in Penticton.

Airport officials say the emergency operations centre has been activated, and airport firefighters and the Fort St. John fire department were on scene.

A witness in the area reported hearing what sounded a plane with engine trouble, however, airport officials say the cause of crash is not known and still under investigation.

RCMP Cst. Chad Neustaeter said RCMP members are also on scene "to assist with the initial emergency response but details are yet to be determined."

Officials say they are working to determine what the operational impacts are to the airport.

"Despite all of the safety precautions that are taken, incidents do happen and it’s heart-breaking in the air show world," a statement from airshow organizers said.

"The North Peace Regional Airport is working with local first responders and ground crews to attend to the pilot and their aircraft. We ask that during this time you are respectful of the families of the pilots who were involved in the incident and ensure that anything you share comes from official source."