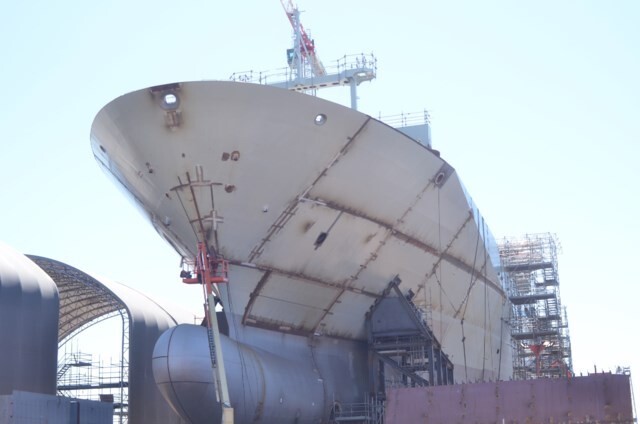 Perched in a lift high above the massive bow of a future Canadian Navy joint support ship, a welder working on the hull is dwarfed by the size of the vessel now taking shape at Seaspan’s Vancouver Shipyards.

You have to look up – way, way up – to get a sense of work currently underway on what will eventually be one the biggest ships ever built in western Canada.

With 75 per cent of its massive “blocks” structurally complete, the first joint support ship is visually impressive as it rises to its full height.

In early June, one of the major 105-tonne blocks, which will serve as the ship’s control centre at sea, was put in place. Last week the huge stern section was also joined to the middle section of the ship. When complete, the ship will have a length of 174 metres.

The manufacturing concept of building massive ships in “blocks” which then get fit together is a little like a Lego project on a giant scale, said Ali Hounsell, director of communications at Seaspan.

The next significant piece of work will be putting the electrical system that serves as the nerve centre of the ship in place, said Hounsell, with up to 300 electricians working on the vessel.

The huge joint support ship taking form on the North Vancouver waterfront is the most visible sign of Seaspan’s work on the federal government’s national shipbuilding program, which has been underway now for over a decade.

For the past two years of the pandemic, some of that work has been taking place away from the public eye. These days, however, the huge ship under construction is unmistakable from Burrard Inlet.

The two joint support ships being constructed at Seaspan – with a total project budget of $4.1 billion – and a polar icebreaker announced last May which will be constructed later at the shipyard – are the centerpieces of Seaspan’s multi-billion-dollar agreement to build Coast Guard and Navy support ships for Ottawa expected to keep the workforce busy for another 10 to 15 years.

Seaspan cut steel four years ago on the first blocks for the first joint support ship, while the shipyard was still completing construction on the second and third of three smaller Coast Guard fisheries vessels.

The shipyard marked a keel-laying ceremony for the first joint support ship in January of 2020. Soon after, the shipyard found itself adapting to continuing production under COVID-19, which involved both careful planning of how many people could be in certain areas at one time and dealing with supply-chain issues.

At the end of June, the government announced that the expected delivery date for both joint support ships has been pushed back by two years – the latest of several such timeline revisions. The first ship is now expected to be delivered in 2025, while the second ship won’t be finished until 2027.

Pandemic supply chain issues and the fact the joint supply ship is the first in its class have both contributed to the delays, said Hounsell.

“If you're a car manufacturer and you're building the first prototype of your car, it's going to take you a little bit longer. There may be design changes along the way from the customer. So there been a number of factors that have contributed to that,” she said.

Hounsell said Seaspan has learned lessons from early construction on the first joint support ship, which will help build efficiencies in the production of the second ship. Steel for the second joint support ship was cut in May of this year – the large grey panels are visible in a number of the shipyard’s steel-cutting and early welding shops.

At the same time, work is also underway on a larger offshore science vessel for the Coast Guard. More than 1,100 tonnes of steel has been cut for that vessel and more than half of the large blocks that will be put together to complete the ship are already under construction in the shipyard. One of those large blocks provided the backdrop for a ceremony last fall to mark 10 years since the awarding of the federal contract.

In April, the three main diesel generators for the ship were delivered to the shipyard.

At about 88 metres in length, the offshore science vessel will be about 30 per cent larger than the earlier three fisheries ships built at Seaspan.

When completed, that ship will be capable of conducting multiple tasks, including oceanographic, geological and hydrographic survey missions and will come complete with a floating high-end research laboratory.

Beyond the huge bulbous bow of the joint support ship today in the yard are neat rows of red-toned steel parts that will eventually be part of the offshore science vessel, laid out so finding those parts is easy for workers. Maximizing efficiency is one of the key issues that’s a constant learning process at the shipyard, said Hounsell.

“We work with people on the on the shop floor at a grassroots level to say, ‘What would make your job easier? What would make your job faster, better? There’s been a lot of improvements to even just the yard layout, the way things are organized.” It may not seem like a big deal, said Hounsell, but once the shipyard is into production on multiple ships, like the 16 medium-sized Coast Guard vessels that are also part of the federal agreement, it can add up to a big difference.