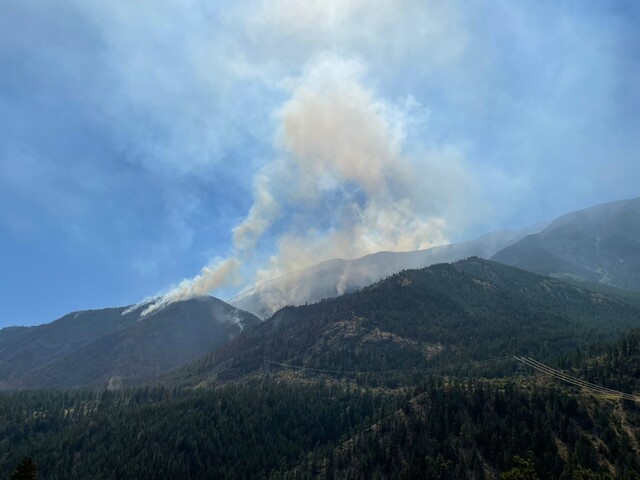 The Nohomin Creek wildfire northwest of Lytton has now grown to more than 3,000 hectares.

The BC Wildfire Service published a new map on Friday, detailing the perimeter of the 3,057-hectare blaze.

The fire was previously mapped at 2,660 hectares.

Pushed by 41 C temperatures, the fire took a run up the ridge upslope of the Fraser River on Thursday.

"Further growth is expected in the high elevation areas where access is inhibited by steep, rugged terrain. The rocky slopes and sparse fuels have slowed fire growth in certain areas. The fire is not moving at a significant pace and is not spreading further west into the Stein Valley at this time," BCWS said Friday.

Crews continue to fight the fire from the ground and air. Ninety-four ground crew firefighters are now on site being supported by 11 helicopters and three pieces of heavy equipment.

An additional 20-person unit crew is arriving on site today. 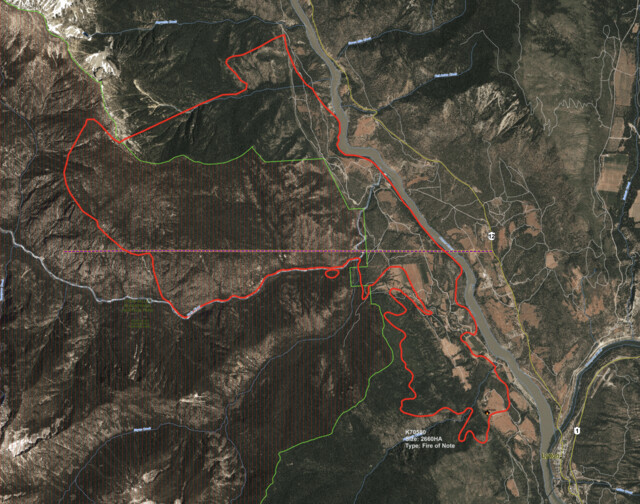 Evacuation orders ordered by the Thompson-Nicola Regional District due to the Nohomin Creek wildfire have been downgraded to alerts.

About 24 properties previously on order are now on alert northwest of Lytton, west of the Fraser River, north of IR27 and south of IR9B, along Spencer Road, as outlined on this map.

Service has also been restored to the Lytton Ferry, and the ferry is now open for local traffic only until further notice due to the wildfire.

A separate evacuation alert issued on July 14 for 31 properties remains in place for this time. Other evacuation alerts and orders from local First Nations remain active.

Residents on evacuation alert are advised to remain packed and ready to evacuate at a moment’s notice.

BC Hydro says its crews have rebuilt and re-energized a section of a power line that was lost to the Nohomin Creek wildfire near Lytton in mid-July.

Hydro crews were able to reconfigure the system and restore power to 39 customers the day the fire started, and then an additional 39 customers on July 24.

Hydro personnel from across the Southern Interior worked on the effort.

Helicopter support was required to bring power poles to the site, and service has now been restored to all customers, except in cases where structures were lost or significantly damaged.

The fire is now estimated to have burned 2,660 hectares as increased fire activity produced smoke that was highly visible in the surrounding area on Thursday.

"Further growth is expected in the high elevation areas where access is inhibited by steep, rugged terrain," the service said in an update Thursday night.

However, rocky slopes and sparse fuels have slowed fire growth in certain areas.

"The fire is not moving at a significant pace and is not spreading west into the Stein Valley at this time," the wildfire service said.

Temperatures on Thursday reached 41 C. Combined with low humidity and light to moderate winds, the fire reached the top of the ridge upslope of the Fraser River, in the Stein Valley.

"The north flank is stable and there is minimal growth east of the Stein Valley," BCWS says.

On the south flank, they continue to establish containment lines.

A total of 106 firefighters ?are fighting the blaze, supported by 10 helicopters and three pieces of heavy equipment.