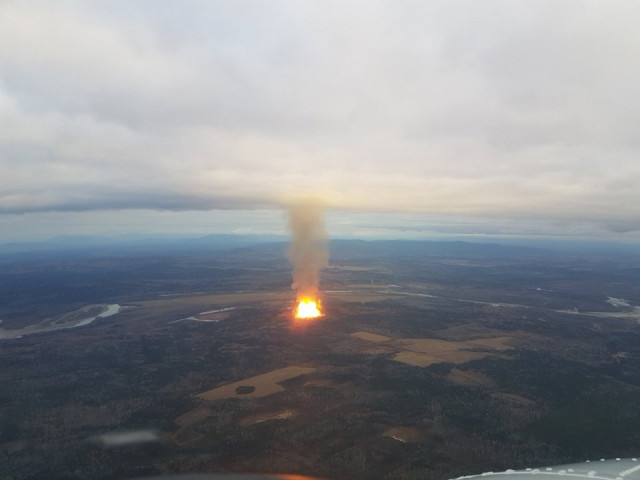 Photo: Greg Noel/Twitter.
An aerial view of the pipeline explosion and fire that rocked the Shelley reserve on Oct. 9, 2018.

The Lheidli T'enneh Nation has backed away from its civil action against Enbridge over the October 2018 pipeline explosion and fire near the band's Shelley reserve.

A notice was filed July 19 at the Prince George courthouse saying the proceeding against Enbridge and its subsidiary, Westcoast Energy Inc., has been discontinued.

LTN's current Dayih, Dolleen Logan, could not be reached for comment Wednesday. The Citizen has also reached out to Enbridge for comment.

On Oct. 9, 2018, the system's 90-centimetre (36-inch) pipeline ruptured 500-700 metres from the reserve's northern boundary, shooting a massive fireball into the air that could be seen for kilometres around.

About 100 band members evacuated as the blast shook homes and showered residents with debris. The subsequent fireball kicked out an intense heat and left some to wonder if a low-flying jet was passing by until they saw what had happened.

In February 2019, LTN filed a lawsuit against Enbridge and a bit more than a month later, Enbridge filed a response denying LTN's claims.

Along with damages, LTN was seeking an order that Enbridge reroute the pipeline away from the reserve and territory.

In March 2021, then LTN Dayih Clay Pountney said the band will press on with the lawsuit after attempts to reach an out-of-court settlement fell through.

A Transportation Safety Board of Canada investigation found that the polyethylene tape coating applied to the pipe to protect it from corrosion deteriorated over time, allowing soil moisture to come into contact with the pipe surface and leading to corrosion and cracking and the subsequent rupture.

Westcoast Energy was later fined $40,000 for failing to maintain inspections of the pipeline prior to the blast.