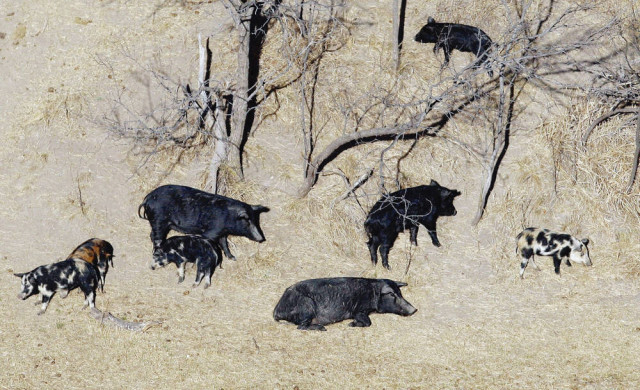 As the province prepares to deal with about a dozen escaped farm pigs that have caused significant damage at the Cowichan Golf Club south of Duncan for the last two months, an invasive-species group says it’s important to address the problem quickly.

Gail Wallin, executive director of the Invasive Species Council of B.C., said once drifts of pigs escape farms, they can quickly reproduce, become much more aggressive and root through crops and wetlands, causing significant damage — even spreading diseases to livestock.

Wallin said feral pigs are considered the most-wanted invasive species in the province right now, and pose serious risks to the environment, economy and human safety. “We have to be on top of this problem right away because [feral pigs] can have multiple litters — three or more a year — when in the wild.”

Three provincial agencies are collaborating to round up the feral pigs on the golf course, whose operators say the animals have caused thousands of dollars in damage.

The golf club’s head pro, Norm Jackson, said the pigs haven’t been aggressive toward people, but he wants them gone as quickly as possible. He said the province has not shared the details of its plan to remove the swine, but he hopes trapping or some other measure begins soon.

A spokeswoman for the Environment Ministry said Friday that staff are in contact with the owner of the pigs to round them up, and if the situation requires further enforcement action, the Conservation Officer Service is the lead agency under the Wildlife Act.

If a decision is made to capture the feral pigs, the Forests Ministry would lead removal efforts, the spokeswoman said.

It isn’t known exactly how many feral pigs are in B.C.

The province says small populations are occasionally reported in the Lower Mainland, Thompson-Okanagan, Chilcotin, Peace and Kootenay regions — plus Bamfield on the Island. They are usually discovered near farms from which the animals escaped.

Feral pigs are the descendants of domestic pigs that have escaped and may or may not have mated with wild pigs. A small population was seen as early as 1990 in the Dawson Creek area.

The pigs are considered smart and very adaptable to any terrain.

The province says large, established populations of feral pigs are “not recorded [in B.C.] at this time,” but it’s a much different story in the Prairie provinces.

The animals are deemed out of control in Saskatchewan, where European wild boars with coarse black hair and big tusks were introduced in the 1990s to help diversify farming operations, but saw several escapes.

Ryan Brook of the Canadian Wild Pig Research Project, based out of the University of Saskatchewan, told CBC last year the province is on track to have more wild pigs than people. Brook said pigs become feral almost immediately after escaping from a farm and populations are expanding in Alberta, Manitoba and Ontario.

“They can harass cattle, eat crops, breed like crazy and are a general nuisance. Even the smell of a new person in an area can send this species into hiding, making it difficult to locate,” Brook told the Nature Conservancy of Canada, where he is a member of the board.

He calls feral pigs the worst invasive large mammals on the planet because, in addition to damaging fields and infrastructure while rooting for food, they can spread disease to humans, wildlife, livestock and pets.

The southern U.S. states are infested with feral pigs, and northern states such as Washington and Montana are concerned about Canadian populations moving south, said Wallin, who will represent the Invasive Species Council of B.C. at an international conference in Calgary next week to discuss feral-pig populations.

“The challenge for any invasive species is that people don’t realize until it’s out of control and too late,” she said.

In a statement to the Times Colonist, the Agriculture Ministry said the provincial government recognizes the threats posed by feral pigs, and staff have been investigating areas with historical and recent reports of the animals.

While to date, no known feral breeding populations have been identified in B.C., the ministry said, it’s “paramount that it remains this way, and that the distribution and abundance of feral pigs within B.C. be kept at very low numbers, or none at all.”

Once a pig leaves an owner’s property and is not captured, it becomes “wildlife” and it’s within the government’s powers to capture or destroy it. Additionally, a pig that is not in captivity or otherwise under a person’s control is designated as Schedule C wildlife and may be hunted by licensed hunters with no closed season and no bag limit.

The province said any sightings of feral pigs (or pigs that have escaped an owner’s property) should be reported immediately, either through the Report Invasives smartphone app or online at gov.bc.ca/invasive-species.

For urgent situations or where there may be a threat to human safety, call the Report All Poachers and Polluters (RAPP) line in B.C. at 1-877-952-7277.