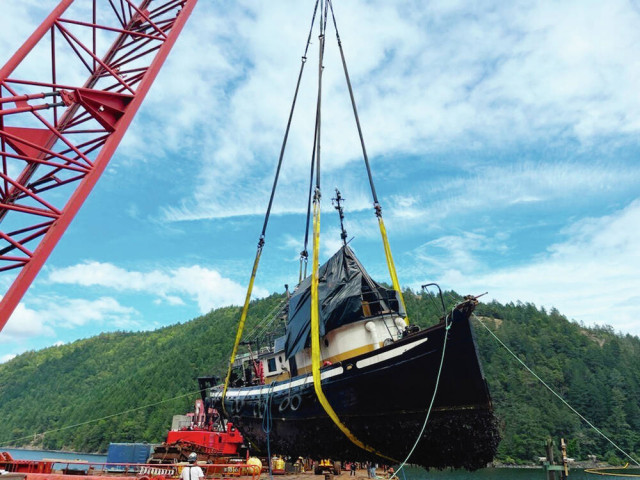 A wooden tugboat-turned liveaboard that sank at the Finlayson Arm dock north of Victoria last month has been raised from the sea floor and taken to a salvage yard for deconstruction.

The Canadian Coast Guard said the 65-foot vessel sank at the Goldstream Boathouse Marina on June 29 after a plank in the hull sprang loose.

The coast guard worked with the Malahat First Nation, Amix Marine Services and marina staff to place booms around the site to protect sensitive ecological subtidal areas, which acts as salmon spawning ground and a home to clam beds, among other aquatic species.

Kiri Westnedge, coast guard spokesperson, said some oil sheen was seen on the water, and is believed to be hydraulic oil, “because the actual vessel didn’t have that much fuel on board — it only had about 100 litres of fuel.,”

The oil was contained within the boom, Westnedge said.

Divers plugged the boat’s fuel vents and assessed its location on the sea floor before it was raised to the surface, lifted onto a barge and taken to a salvage yard for deconstruction on July 6.

Westnedge said the coast guard responds to oil spills of varying sizes every day, but a ship sinking is far less common.

“A lot of the times they are just a couple of drops, under a litre … this was much more significant because the vessel sank.”