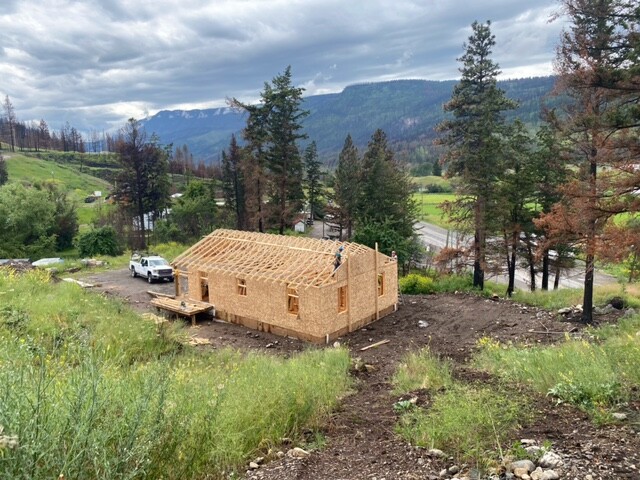 The Mennonite Disaster Service will be working to rebuild four homes in the Monte Lake area that were lost in the 2021 fire season.

The Mennonite Disaster Service has set up shop at the Westwold Community Hall.

Roman Heuft, director of the Monte Lake MDS project said they have set up temporary bunk rooms in Westwold for volunteers to stay in while working on the project.

“Currently I think we have about 16 people there now. Last week we had close to 30,” Heuft said.

“We’re rebuilding homes for people who are underinsured or have no insurance and qualify for minimum incomes, that type of thing.”

According to Heuft, the volunteers are currently focusing on four homes for this year.

Three of the homes are in Monte Lake while one on the West Six Mile Creek area. Because of the location of the four homes, Heuft said they chose Westwold to set up camp.

He said they are only focusing on four at the moment due to limited facilities.

Home owners don’t need to be Mennonite to apply for assistance from the MDS, Heuft said,

“They don't even have to be Christians. We respond with the love of our Lord says Jesus to anybody who asked for help,” he told Castanet Kamloops.

Heuft said the project intends to finish the four homes but their accommodations rely on Mother Nature.

“[We’ll be here] until the snow drives us away. So we actually have shower trailers set up outside and we have a basically set up an RV camp on the on the property,” he said.

“So that's kind of limited to when freeze up comes — we do intend to be able to complete all the jobs but that will be our timing factor.”

Volunteers aren’t exclusively there for to rebuild homes, the project director said MDS volunteers have been helping with other emergency response the community needs.

“We had that big rainstorm last week and a call for help came out to to do sandbags so the group immediately went and did sandbags,” he said.

“They assembled a couple of truckloads full of sand and filled them all into bags — they were filling ‘em faster than the trucks could deliver them to where they needed to go. So they're pretty amazing group we had last week they were just precious.”

Heuft said the community has been very welcoming.

“The community has been amazingly responsive,” he said.

Heuft said the MDS team would be hosting a get-together at the Westwold Community Hall to introduce themselves to the community.

“We're having a community get together at Westwold Hall. Just to let them know who we are and that we're here to help,” Heuft said.