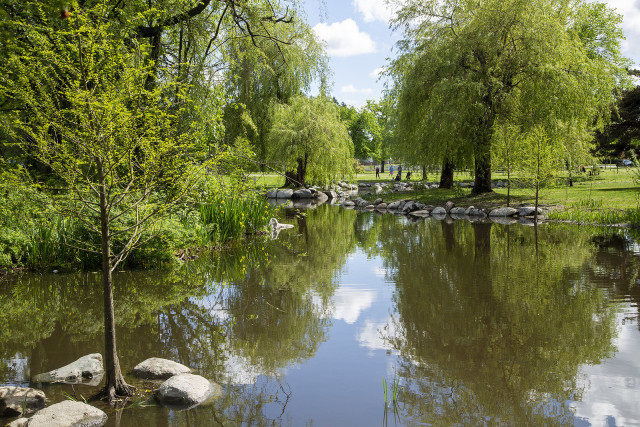 A community group and the City of Vancouver are at odds over the future of a pond in Memorial South Park.

According to Kathryn Langmead, the administrator of a Change.org petition to "help save our community pond and wildlife" at the park (which is also referred to as "South Memorial Park") the area is a Migratory Flyway and songbirds rely on this pond to rest and refuel.

Two years ago, the Vancouver Parks Board "reconstructed the pond to make it more wildlife-friendly" by widening the pond, removing invasive plant species, installing water plants, and introducing boulders for birds to perch on but in doing so they also used heavy equipment that cracked the base of the pond causing it to leak, explains Langmead on her petition.

Subsequently, the Parks Board has renamed the pond a seasonal wetland meaning it will naturally fill with rainwater during the winter and dry out in the summer. This change would no longer require the Parks Board to continue topping up the water level with fresh water while it is leaking.

Langmead's fear is that "once the pond dries up the hole left behind will quickly fill with garbage, discarded mattresses and the huge boulders will be graffitied with spray paint. The degradation and vandalism is inevitable."

The petition, which currently has just over 1,040 signatures, was created to raise awareness of the request to have the pond repaired and remain a freshwater wildlife habitat year-round. Langmead and her supporters are also planning a rally at the pond on Thursday, June 30 at 5 p.m.

The Parks Board responded: "We know that the pond at Memorial South Park is a beloved place for lots of residents who have enjoyed its aesthetics for many years. However, as this park feature does not recirculate water, up to 11 million litres of treated drinking water has been added to maintain water levels every year."

Due to the increasing periods of extreme drought, Eva Cook, Senior Communications Specialist for the Parks Board, says that they must act in accordance with City by-law 4848 and the Metro Vancouver Drinking Water Conservation Plan, and "take action to preserve precious drinking water."

Cook says that this water is needed for cooling, targeted irrigation and preventing fires. But she also states that "repairs to the pond’s drain are underway to support the pond in retaining rainwater."

The repair will address one of Langmead's concerns as she says that "as long as the leak remains unrepaired no amount of rainfall is going to fill [the pond]." However, she takes issue with the Parks Board's continuation to water nearby sports fields when they will not refill the pond.