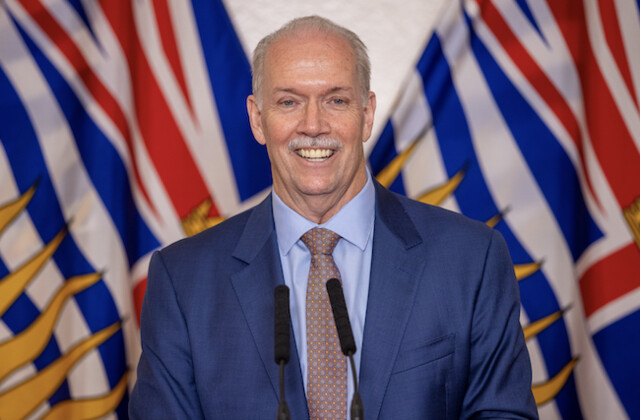 Premier John Horgan is the first B.C. premier in 36 years to step away from office without facing an internal revolt, deal-breaking scandal or facing defeat.

Michael Prince, a political scientist and professor at the University of Victoria, said ­Horgan is doing something many leaders don’t do — “which is to relinquish power.”

“He knows this is a good time to be going out,” said Prince.

Horgan is still riding pretty high in approval ratings and handing over the party in good condition, he said.

“He loves people and that speaks to his popularity ratings,” said Prince. “I think he’s come across as a very competent leader and someone who genuinely enjoys people, likes engaging with people, and giving as good as he gets and for a lot of people those are still endearing qualities.”

When Horgan dropped an F bomb during heated debate during question period in April over the doctor shortage, he responded quickly with an apology, noting: “If my mom was still around, she’d be on her way to the legislature with a bar of Irish Spring.” Horgan, who often fondly referred to his Irish heritage (his father was born in Ireland) didn’t wear the fallout over the expletive for long.

“A lot of politicians are so scripted, so tightly managed today, in a cocoon, but he’s a good communicator,” said Prince.

An Angus Reid poll released June 16 showed Horgan, who has typically had one of the highest approval ratings among Canada’s premiers, had dropped seven points this quarter to 48 per cent, from a high of 71 per cent in the spring of 2020. That put him in third place after Nova Scotia Premier Tim Houston and Saskatchewan Premier Scott Moe.

While attending Trent University where he earned a bachelor of arts degree — he earned a master’s degree in history from the University of Sydney in ­Australia in 1986 — Horgan attended a New Democratic Party rally led by MP Tommy Douglas, which influenced his NDP leanings.

Horgan went on to work under NDP MPs, served under three NDP premiers, was elected to office in then Malahat-Juan de Fuca in 2005, won the leadership in 2014, made a deal with the Greens for a minority government in 2017, and won a majority in a snap election in 2020.

Carole James, one of his closest friends and a former NDP leader, finance minister and deputy minister, said Horgan would be the first to say that no one is “irreplaceable” and while he will be missed by both people inside government and outside, there will be a strong leadership race and he’ll be there to mentor the victor.

Prince agreed that while Horgan is regarded as one of the party’s greatest assets, his departure will not knee-cap the party.

Attorney General David Eby, 44, elected in 2017, has often been labelled the heir apparent, said Prince, but he wouldn’t wager on who is likely to be the new leader.

Horgan’s retirement announcement was “so John” in that he is giving time for a new leader to be chosen, he is giving caucus members two years to “find their feet and to show their strengths,” and he is making his commitment to his family a priority, said James.

“He’s really been an incredible coach for this team and I am so proud to be part of that team and to be his friend, because he is really an inclusive leader in these incredible times we’ve all faced,” said James. “John let his team share their strengths while he guided us and reminded us about the importance of serving the people of this province.”

James retired after a diagnosis of Parkinson’s disease following recovery from cancer.

“I always said if I was diagnosed a second time I was going to retire.”

“He’s had two cancer scares,” said James. “It just reminds you of what’s important in life and he talked about that. He loves his job and he loves the work, but he also loves his family.”