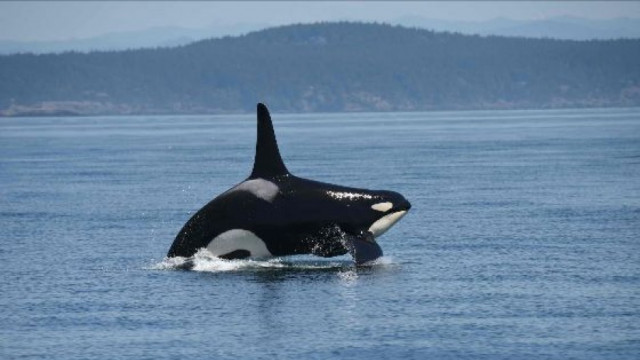 Photo: UBC.
Southern Resident Killer Whales suffered "energy deficits" from lack of food in six of the past 40 years.

South Resident Killer Whales (SRKW) have suffered an “energy deficit” from lack of food in local waters in recent years, according to a new study, which recommends implementing size-selective fishing methods and practices to protect the oldest and largest chinook salmon.

The SRKW population has dwindled in size in recent years to about 73, while their northern cousins are at a robust 300.

The availability of chinook salmon, which makes up their primary diet, has been assumed to be the main reason for the relative declines in population of the SRKW.

Scientists at the University of BC recently estimated chinook populations in the Salish Sea of B.C. where the SRKW feed in the summer months.

They conclude that the SRKW have been in an “energy deficit” for six of the last 40 years. An energy deficit means they are taking in fewer calories than they are burning.

The SRKW spends only a few months each year in B.C.waters, so their lack of food may not be strictly a local phenomenon. They may be having a hard time finding enough food in other parts of the Pacific Ocean as well, such as California.

“It’s very hard for us to know exactly where they’re occurring, and the field work is really hard in the winter as well, so we are definitely missing some data there,” Fanny Couture, a doctoral student at the Institute for the Oceans and Fisheries and study’s lead author told BIV News.

Chinook originating from the Fraser River, Columbia River and Puget Sound make up about 82% of the SRKW diet, although coho and chum salmon also make up a significant amount of their diets in September and October.

“In fact, coho and chum salmon may constitute between 20% and 50% of the SRKW diet during this period,” the study estimates.

Killer whales don’t just favour chinook – they favour the largest and oldest chinook, and it’s the decline in these large older fish (four and five-year-olds) that appear to be largely responsible for the whales’ periodic energy deficits.

The study confirms what many Coastal First Nations have been saying for years now: an exploding seal and sea lion population is at least partly responsible for declining availability of salmon, especially chinook. The study estimates harbour seals are eating more chinook than SRKW.

“In 2020, our model predicted that SRKW would consume about 800 adult Chinook salmon per day, against 1,000 for harbor seals,” the study estimates.

The commercial catch for chinook was reduced in the late 1990s, in response to declining chinook numbers, he notes.

“Those declines have continued despite severe fisheries reductions, and one very likely candidate for causing them is the massive increase in abundance of Steller sea lions since the mid-1980s,” Walters writes. “Those sea lions now consume more fish than all the B.C. commercial fisheries for all species, combined.”

Steller sea lions’ main diet is herring, but Couture said there is growing evidence that they are also eating more salmon.

Despite reductions in the allowable catch for commercial fisheries for chinook, it’s estimated that that fishermen still catch more chinook each year than orcas eat.

“Although chinook salmon fisheries in marine waters have been drastically reduced since 2000s, the annual average number of adult chinook salmon harvested by fisheries between 2010 and 2020 was 198,530 while about 187,200 fish were consumed annually by SRKW during this period,” the study estimates.

“Our model’s predictions thus reinforce the importance of implementing size-specific selectivity for chinook salmon fisheries operating along the Northeastern Pacific Coast, as well as the use of fishing techniques promoting the survival of larger individuals.”

The study’s authors don’t specify whether size-selective methods need to be introduced for the commercial or sport fishing sectors, or both.

The study also urges that predation by pinnipeds also be considered “when implementing future conservation goals.”