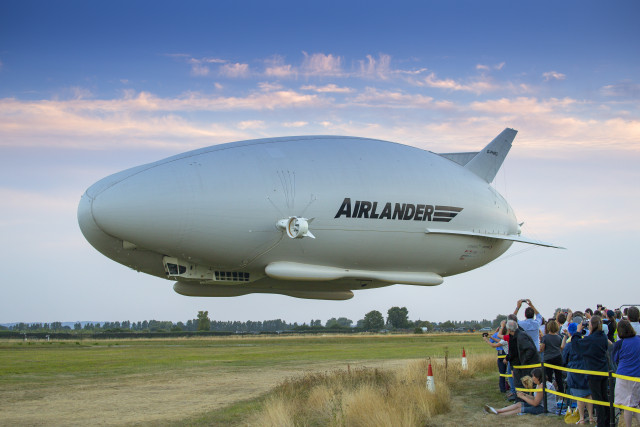 Photo: .
A break down of carbon emissions and travel time from Seattle to Vancouver. Hybrid Air Vehicles

For those looking for a low carbon way to travel, would you consider a hybrid airship developed from an American military spy blimp program?

That could be the new way to go between Vancouver and Seattle, according to Hybrid Air Vehicles (HAV). The company has developed the Airlander 10, which is essentially a modern blimp or airship (though they never use the term blimp and rarely use airship). The 'hybrid aircraft' uses a gas-filled (helium) hull for most of its lift, though it is heavier than air, so it requires its engine and design to provide more lift.

The main selling point, according to company, is sustainability, with trips producing only a fraction of the CO2 per traveller as other methods.

The prototype has been flying around Europe for a bit and production of the first commercial ships is expected in 2025 (that's only three years away).

As part of their pitch, HAV has suggested three example routes around the world as ideal uses for the Airlander 10; one of those routes is from Vancouver to Seattle.

"Seattle to Vancouver is an important route between two cities. The options for transport between these two cities are by car, train or aeroplane. These options are either carbon-intensive or time-intensive," they note in a press release.

When comparing trips from city centre to city centre HAV notes that planes (3 hours and 6 minutes) and cars (2.5 hours) are faster, but they produce a lot more C02 per passenger (23.6 kg for car travel and 53.2 kg for plane travel). Trains are closer to the HAV airship; they estimate trips average 5 hours and 9 minutes while creating 7.8 kg of C02.

The Airlander 10 would produce an estimated 4.61 kg of C02 per a passenger on a 4 hour and 12 minute trip. That's taking into account boarding times and security check-ins where applicable.

"Transportation in cities is already stretched and transportation between key regional areas are served by carbon-intensive or time-intensive options. Sustainable transport inside and between urban areas has never been more important," says HAV.

To cut down on CO2 even more, they have plans for an all electric version by 2030, essentially creating zero-emission air travel, depending on where the electricity comes from.

Among the other notable things about the Airlander 10 is its ability to land on water and smaller landing space requirement than a commercial jet (it needs a relatively flat space of 600 m).