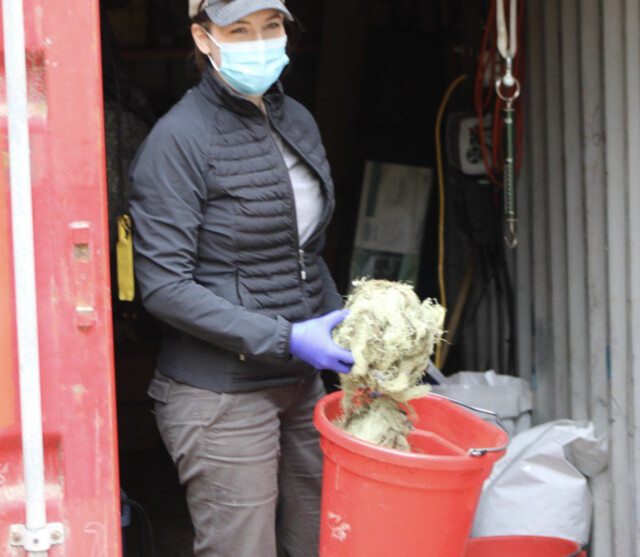 Photo: John Boivin, Local Journalism Initiative Reporter
Wildlife veterinarian Amelie Mathieu prepares the next meal for the caribou. The animals are fed a daily ration of lichen and a nutritious dry kibble. The first calf was born May 24 at Nakusp's caribou maternity pen.

It’s as quiet as a hospital zone on this mountain bench above the Nakusp Hot Springs. Which sort of makes sense, since there’s literally a maternity ward set up at the heavily forested site.

“We’re surprised how little disturbance we’ve had up here,” says Paul Seaton, a wildlife biologist and member of the Arrow Lakes Caribou Society. “It seems the locals have agreed to avoid the area as much as they can.”

That includes wildlife as well as human visitors.

“We’ve had a couple of black bears showing up,” he said. “We caught them on camera, but they wandered on past and kept on going.”

Seaton climbs up a flight of wood stairs – taking care not to make a lot of noise – and opens the door of the observation post set up by the society at the pen’s gate.

He’s greeted – quietly – by three others keeping watch today over the eight female caribou housed in the maternity pen. From this vantage point, they can see the feeding troughs, but the animals are nowhere to be seen. That’s actually a good thing.

“Things are working out better than expected,” says Seaton. “We’re happy with how comfortable they are, how they are making trails, using the whole pen – they have their favourite spots.”

Indeed, things have settled down to a bit of a routine at the maternity pen, just the way the planners had hoped.

Seaton, Mathieu and the rest of the crew have been following the animals’ progress since the seven pregnant cows – and one yearling female – were captured March 25. They were rounded up and put in this 6.6-hectare (16-acre) protective enclosure, surrounded by a 10-foot landscape fabric wall and 7,000-volt electric fence. Here they’ve been fed two squares a day of lichen and grain pellets, watered, and kept safe from predators while they give birth to their calves.

All the while, the shepherds keep close watch over their flock.

“A big part of the job is observing them. We don’t know when the calves are going to come, so we are becoming very familiar with their behaviour,” says Mathieu. “Number 3 for instance, has been running around, restless, so we think she may be getting ready to give birth.”

Mathieu has worked on caribou recovery programs for the provincial government for several years, and consults on several similar projects. She’s here for the critical birthing period, in case she’s needed.

“The idea is, if there’s a calf that’s sick or in distress or abandoned, we are there to intervene quickly and save its life,” she says.

A Nakusp veterinarian has granted the project full access to her clinic, giving Mathieu the facilities she would need to stabilize any calves. If need be, the babies could then be moved from there to the Calgary Zoo for more long-term care.

But so far, it’s been smooth sailing. The animals have thrived in their sanctuary.

“They are delightful. Of all the animals we can do this with, caribou are a perfect creature,” she says. “They are much calmer than other ungulate species, and they respond well to the diet we feed them. They are just sweet animals that don’t panic easily. It’s not ideal, but they do okay for the time being. They enjoy their food; they are calm; they have their routine; they’ve made their own trails. They don’t challenge the fence. They are quite resilient.”

The first calf was born in late May – a female, to everyone’s delight. Since then, four more healthy calves have been born – three males and another female.

When a calf is born, the shepherds implement a special protocol.

“We give the mother and calf 24 hours of undisturbed time, so the calf can drink from their mom and get all the proper nutrients,” says Mathieu. “After that we catch them, and put a collar on.

“The trouble is, if you wait too long, you can’t catch them. They’re too fast. But if you do it too early, you can interfere with their health – they need their time with their mom. So we have this small window to go in there and check them. We try to do the examination as quietly and as fast as we can.”

The first baby was strong and healthy, and at a near-perfect birth weight.

“They are staying separate now, away from the rest of the herd. But when they come to the feeder, everyone else moves away. Mom has poked and pushed them. She’s a very good mom, very protective, and the rest of the herd just has to give them space.”

This is the busy time for the veterinarian.

“The most critical period is right after they are born, the first few days of life,” she says. “If they don’t drink, they’ll get sick. They need to drink their mother’s colostrum to gain antibodies – they don’t have any when they are born. Their umbilical has to dry up and close off, that can get infected easily. That can cause problems. They are wobbly and weak when born – we are concerned about them breaking a leg or falling in a crevice. So every day we make sure we get our eyes on them. But it will be less stressful as they age.”

Contact with the animals is kept to a minimum, as mothers can also be easily spooked and will abandon their calves. Much of the monitoring is done through a spotting telescope and closed-circuit cameras.

The $450,000 project will see the caribou and their calves kept here until mid-July, when they’ll be released to their summer pastures just up the mountain from the maternity pen. Then they’ll be on their own – but facing the world in the best shape of their lives. And that gives the project team hope for the endangered herd, which number less than 30 animals.

“If we had left this another year or two, the way forces are that were lined up, it would have been too late,” says Hugh Watt, the chair of the Arrow Lakes Caribou Society.

“It’s unfortunate we have to do this. In an ideal world this would not happen,” adds Mathieu. “But it’s nice to be able to do something. To make it right.”