Lawsuit to 'clear the road'? 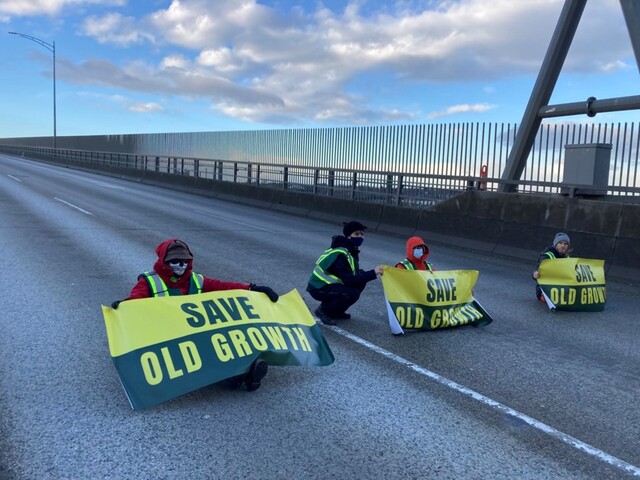 Photo: Save Old Growth
Save Old Growth protesters blocked the Ironworkers Memorial Bridge on April 4 in efforts to pressure the government to immediately stop old-growth logging in B.C.

A group opposing road blockades meant to draw attention to old-growth logging in British Columbia says it is considering a class-action lawsuit for “disrupting highway users.”

The group, calling itself Clear the Road, said it’s asking anyone who has their commute disrupted “to document the harm they suffer.”

Clear the Road organizer Tamara Meggit says the group wants to hear from anyone who has lost a shift at work, missed a job interview or medical appointment, or whose business has experienced losses due to shipping delays.

The group made the threat of legal action ahead of June 13 blockades planned by Save Old Growth.

“It was time that the people that are held hostage pushed back against these illegal and dangerous blockades,” Meggit told Glacier Media from her home in Comox Valley on Vancouver Island.

Describing the Save Old Growth protests as “purely a nuisance campaign,” Meggit added that B.C. “already has world-leading standards in place for protecting rare ecosystems.”

Meggit says the Clear the Road group is directly backed by the Resource Works Society, an organization originally funded by the Business Council of British Columbia. The council has advocated for the development of liquefied natural gas pipelines, logging and Canada as “the good guys in the international oil business.”

In a statement, the Resource Works Society described the blockades as “indiscriminate tactics” that “hurt the innocent, and risk creating a backlash against progress in responsible forest practices.”

The Clear the Road group cites an over $300-million proposed class-action lawsuit filed by Ottawa residents earlier this year to free up city streets from the ‘Freedom Convoy’ blockade that paralyzed the nation's capital for weeks.

Lawyers for the residents won an injunction in an Ontario court, leading to the freezing of up to $20 million in assets raised around the world for the Freedom Convoy.

The anti-blockade group says that case sets a precedent for protesters opposing old-growth logging in B.C., who have previously blockaded roads in Metro Vancouver and Vancouver Island.

“Freedom of expression is protected by Section 2 of the Canadian Charter of Rights and Freedoms, but expressing a point of view about an issue does not confer the right to commit criminal acts,” the group said in a press release.

Last month, a spokesperson for Save Old Growth told Glacier Media the activist group was planning to escalate its blockades, shutting down intersections and bridges across the Metro Vancouver region. The group has been behind a number of high-profile public protests, blocking roads on Vancouver Island and the Lower Mainland.

A day before Clear the Road made its legal threat of a class-action lawsuit, two old-growth protestors charged the field and chained themselves to a goal post at a Canada versus Curaçao Concacaf Nations League soccer game at BC Place in Vancouver.

The intent, said Save Old Growth co-founder Zain Haq, was to increase police costs to the point where government would have to step in to properly address climate change.

Blocking roads and bridges has become an increasingly popular tactic to draw attention to social injustice or environmental crises. For years, it has been used by the Black Lives Matter movement to bring attention to the disproportionate targeting and killing of Black men at the hands of police. And around the world, protesters demanding action on climate change have increasingly chained, glued or thrown their bodies in front of traffic to bring attention to the global environmental crisis.

“Our plan would be in June to escalate to a point where the cost is just too high for the police to see this as a public safety issue or as a protesting issue,” said Haq, a Simon Fraser University student who was sentenced to two weeks in jail in February for actions related to stopping construction of the Trans Mountain pipeline extension.

Haq agreed confronting moving traffic is “extremely dangerous” but that other avenues to draw attention to the climate crisis have been exhausted without adequate action.

“I personally almost got run over by a car in January, and other people have been in similar situations in April,” said Haq, pointing to the power of "transgressive non-violence" and how it galvanized public opinion in the U.S. civil rights movement of the 1960s.

“But the reason why we've been taking this risk is not because we don't recognize how dangerous it is, it’s just that we're more terrified by what's coming down the road due to rising temperatures [of the Earth].”

Those statements came shortly after Vancouver Police Chief Adam Palmer said he was concerned about a ballooning cost to manage environment-related protests and concerns over safety of all involved.

Last year, the Vancouver Police Department spent more than $3 million of its budget on policing protests, most of which related to the environment and anti-vaccine movements, which disrupted traffic at major intersections and on the Lions Gate and Ironworkers Memorial bridges.

That cost represents a nearly six-fold increase over three years.

With files from Mike Howell and Allie Turner