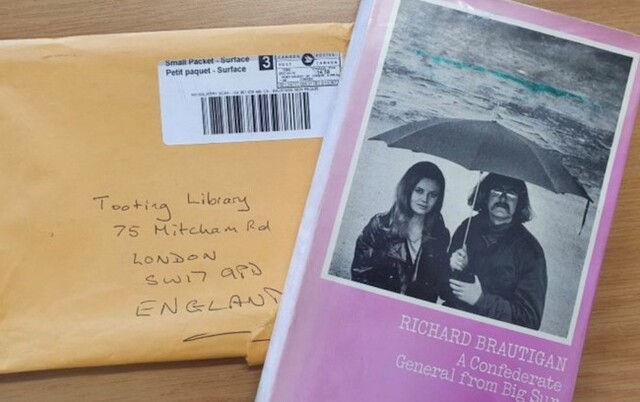 A library in England is trying to determine how a book 48 years and 107 days overdue made its way to Port Moody.

The Tooting Library, one of 12 that comprise the Wandsworth library system in south London, posted the manuscript mystery on its Twitter account Monday after it received a plain brown envelope posted from B.C.

Inside was a copy of A Confederate General from Big Sur, by Richard Brautigan, that was due Feb. 19, 1974. The pink check-out slip was tucked into a brown envelope that warns ominously, “If this book is not returned to the library on or before the last date shown on the card, a fine will be charged in accordance with the Libraries Regulations.”

Brautigan was an American novelist, poet and short story writer who died by suicide in 1984. A Confederate General from Big Sur was his debut novel, published in 1965. It’s about a man named Lee Mellon who believes he’s a descendant of a Confederate general from Big Sur, California, who may or may not exist.

While the book’s dust jacket boasts Brautigan’s fantasies are “ingenious, blithe and beautiful,” it didn’t exactly fly off the shelves and subsequently went out of print.

But interest in it reignited when Brautigan’s 1967 novella, Trout Fishing in America, was a critical and commercial success, selling more than four million copies worldwide and putting the author at the forefront of the decade’s counterculture youth movement.

By the time Brautigan died at the age of 49, he’d published nine novels, as well as 10 collections of his poetry. Several writers cited him as an influence on their own work, including Canada’s W.P. Kinsella. The late author, whose most famous work, Shoeless Joe, became the basis for the Kevin Costner movie, Field of Dreams, wrote in the introduction to his 1985 collection of 26 short stories, The Alligator Report, “I can’t think of another writer who has influenced my life and career as much.”

According to the Guinness Book of World Records, the longest overdue library book is a historical tome about Northern Germans, written in Latin, that was borrowed in 1668 from the library at Sidney Sussex College at the University of Cambridge and returned in 1956 — 288 years late.