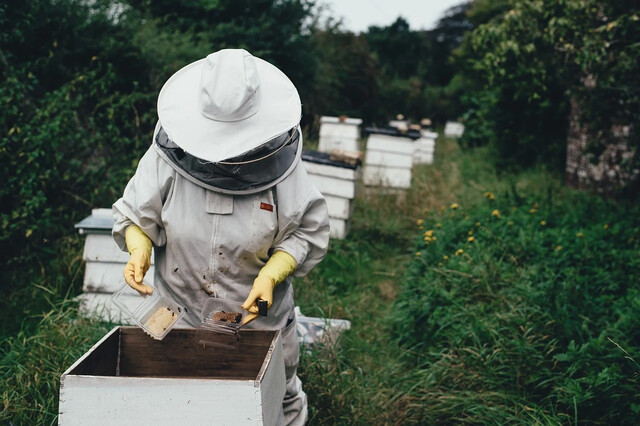 Bee colonies all over the world are being devastated by a mite, smaller than your pinky fingernail, carrying a deadly virus.

The deformed wing virus (DWV), first detected in 1982 and transmitted by varroa mites, misshapes the wings of a bee so that it can’t leave its colony to forage. The virus can spread rapidly throughout colonies, often leading to mass starvation as fewer bees are able to leave and return with food.

A recent study tracking the spread of the highly transmissible DWV-B variant, suggests that growing infections worldwide have led to increased rates of colony losses in temperate regions.

Professor Leonard Foster, senior academic bee researcher at the University of British Columbia’s BeeHIVE research cluster, said this virus has been prevalent in Canada since bee deaths nearly tripled in 2007.

“In the time that DWV-B has been spreading through the country, we've seen higher than historical losses of bees in all provinces, including B.C.,” Foster said.

While DWV is not the only virus varroa mites transmit, Foster said the A and B variants of DWV are definitely the most common.

“The two main variants of deformed wing virus are probably the single biggest problem for bee health that is also linked to the varroa mites,” he said.

The most dangerous type of transmission from mite to bee is when the mite attaches to an egg or larva, according to Foster.

“If an adult gets infected, basically, there's no effect on the bee,” Foster said. “But if an egg or a larva gets infected, then the virus causes something to go wrong in the development of the wings.”

Symptoms can range from a slightly misshapen wing to a vestigial or non-functioning wing, to no wing at all, Foster explained.

The ever-growing spread of the virus in B.C. is not only killing bees but also collapsing the livelihoods of beekeepers. Foster said while beekeepers have been able to stay afloat in recent years, the continuous spread of DWV and other viruses is making it increasingly difficult to earn a living.

“As more beekeepers decide to get out of the business because there are too many of these health threats to bees for them to keep a viable business running, that will mean fewer and fewer bees,” he said.

Professor Robert Paxton, co-author of the recent study on the spread of the DWV-B variant, said in an emailed statement that beekeepers are likely to suffer greater colony losses this year than in the past.

Paxton wrote that beekeepers need to become increasingly vigilant in controlling the spread of the varroa mite, especially during the winter months.

So, how are beekeepers fighting to keep DWV out of their colonies? That depends on time, resources and ethics, Foster said.

“There's no equivalent of a vaccine in bees for viruses,” he said. “The only mechanism that beekeepers have is to control varroa mites, the vector that moves the virus between colonies.”

While the most effective preventative measures include constant monitoring and the use of chemicals, Foster said some beekeepers prefer not to use chemicals and will employ alternative measures.

These alternative measures can include freezing male bee larvae, considered more appetizing to mites than female larvae, to kill the mites, and dousing bees in icing sugar, which forces the mites to detach from the bees.

Despite the growing concern around DWV and the global spread of its B variant, Foster said it's important to remember that bee health is much more complex than just this one virus.

“This DWV-B is certainly not the only problem that bees are facing.”