These are the best rejected personalized licence plates you won't get to see on B.C. roads 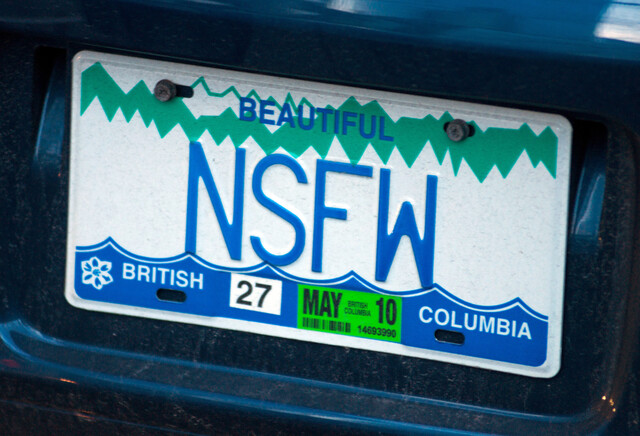 ICBC has sent Vancouver Is Awesome their list of rejected personalized number plates, and while many make some level of sense (BLU-BYU, GO FAST, and variations of 420), some are a little surprising. Others are hilarious ideas we wish made it to the streets.

Have fun decoding some of these.

Plates ICBC rejected for being too suggestive, obscene, or offensive or not in good taste include:

Another big reason for rejections were alcohol and drug-related plates; lots of these were related to cannabis, but wine and beer got roped in as well.

Trademarks and intellectual property was a barrier as well, especially to some surprises, like:

A regular category is for plates suggesting poor driving. Among those rejected the past two years for that were:

The last broad category for rejections was religious and political reasons. It seems ICBC will reject any religious references, as things ranging from ISLAM to VISHNU (and a whole bunch of variants) to PASTOR were all rejected. Even SACRED was vetoed. Political plates included ESCOBR, BREXIT and POLIC3.

Some rejections seem to take unexpected implications of a word to heart. Among the words rejected were FROGGY for being not in good taste (it was rejected the next year for being related to violence), INDIAN for being a "Trademark" and THEBEST for being speed and racing related. And SAUCE and ICEMAN were both rejected for being alcohol or drug-related.

Included in the plates rejected for sexually suggestive or inappropriate connotations were KIKI, ROGUE1, and RIVIAN. And PEW PEW (and PEW-PEW) was too violent, according to ICBC.

A few patterns pop up in the rejections; one is the number of people wanting guns or weapons of war as their licence plates. Rejections included AK-47, R-77 ( a Russian missile) and 32BORE. At the same time MK EK9 (which was rejected) can refer to a machine gun or a type of Honda Civic.

ICBC also had one category that only saw one entry over the two years; the "express or imply human rights discrimination" category had JAPMAN fall under it.

Tacos are apparently a grey area to ICBC. In 2021 just TACO was rejected for being ''sexually suggestive' or having 'inappropriate connotations' which some may consider a stretch. TA-CO was also rejected.

Especially given that other TACOs got the green light. In the list in 2020 TACOGUY was rejected, but for an administrative reason, most likely because it was already out there. Two others, VI TACO and RG TACO were ok.

And then there's the TACOMN. In 2020 it was rejected for being suggestive or offensive, but by 2021 society had progressed enough for it to be approved (the same year TACO on its own was rejected.)