A cougar sighting near a Coquitlam school and park has a neighbourhood on edge.

A sign indicating a cougar is in the area has been posted next to Riverview Park Elementary. 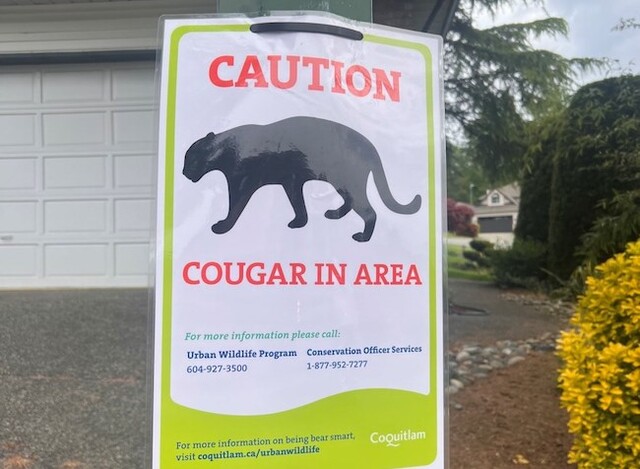 School District 43 officials say they are aware of the sign and have a protocol in place in case of wild animals on or near school grounds.

SD43 spokesperson Ken Hoff says staff are keeping a close watch should the cougar return to the area.

In addition to practising "shelter in place drills," there has been increased supervision on school grounds near wooded areas and children are encouraged to play on the upper field, which is a visible area, "for ease of supervision, particularly when animals have been spotted nearby."

In addition, students attending Kids Cottage Daycare, who are chaperoned to the school, are transported by shuttle if wildlife is reported in the area.

According to the BC Conservation Service, signage went up in the area of Riverview Crescent and Chilco Drive May 15 after an email report from a Facebook account.

Two days later, a cougar was reported again to the city "in the same general area."

"It is not uncommon to have wildlife such as cougars inside of city limits as an abundance of wildlife uses these green spaces, streams and power lines to travel in the city," a spokesperson from B.C.'s Ministry of Environment stated in an email.

A sign posted by the City of Coquitlam encourages people who see a cougar to call the city's Urban Wildlife Program at 604-927-3500 or the conservation officer service (Report all Poachers and Polluters — RAPP line) at 1-877-952-7277.

Cougars can be active day or night, but they primarily hunt at dawn and dusk.