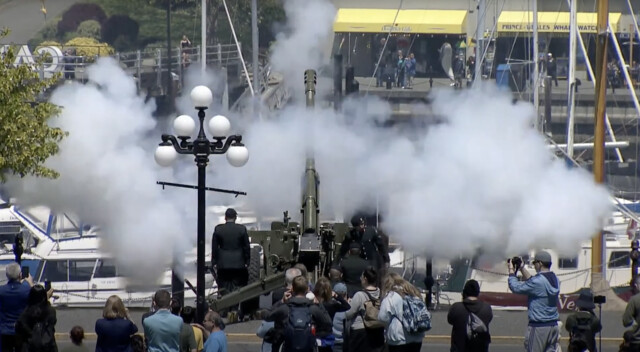 Horgan was joined by Lt.-Gov. Janet Austin at a welcoming ceremony at the B.C. legislature for Simon, Canada’s first Indigenous governor general.

The ceremony included a traditional First Nations welcome as well as a military honour guard and a 21-gun salute.

Simon was also expected to visit the Orange Shirt display in the legislature honouring victims and survivors of residential schools before meeting with Chief Robert Thomas of the Esquimalt Nation, Chief Ronald Sam of the Songhees First Nation, and other First Nations leaders.

The five-day tour is part of Simon’s efforts to visit each province and territory to engage with Canadians from across the ­country.

She plans to visit Oaklands Elementary School in Victoria and the University of Victoria, and travel to Kamloops for a memorial marking a year since unmarked graves were discovered at a former residential school.

She will also attend a ceremony in Victoria for the 75th anniversary of the Canadian Ranger Corps, which provide a military presence in remote, isolated and coastal locations throughout Canada.

On Saturday at 10 a.m., the Governor General is to visit the Institute of Ocean Sciences to meet with marine researchers and learn more about their work.

There are no official events scheduled Sunday.

On Monday, the Governor General will begin the day in Kamloops for the Tk?emlúps te Secwépemc ceremony, which will include cultural ­performances and dances, hand drumming, prayers and remarks from various speakers, and return to Victoria to attend the 4:30 p.m. Canadian Ranger ­ceremony at Government House.

On Tuesday at 10:30 a.m., Simon is scheduled to visit Oaklands Elementary School, and take part in a question-and-answer session with students, as well as reading Fishing with Grandma, by Susan Avingaq and Maren Vsetula, to a group of Grade 2 and 3 students.

“We didn’t expect to punctuate the end of this year with this, but we’re thrilled,” said Eggert, noting plans were finalized last week.

The totem pole, unveiled last May, depicts animals chosen by students and was created by Kakwaka’wakw and Coast Salish artist Carey Newman, who is also an Oaklands parent, and assistant Tejas Collison.

The bear, wolf and otter were chosen by the students in 2018. Tucked amongst the other animals are an orca, frog, eagle and moon and thunderbird.

A resilient hummingbird added to the plan in the wake of the pandemic will be permanently placed days after Simon’s visit, said Eggert.

More than 750 Oaklands Elementary students and staff, along with parents and community members, have taken part in collaborating and carving the totem alongside Newman and Collison, she said.

“She caught wind of that and my understanding is she’s coming to look at the pole and hear from our students about the Legacy Project,” said Eggert.

“My hope is that she’s inspired by the Legacy Project and that she gets a picture of what reconciliation can look like and sound like for young students, young people.”

She said she hopes the visit gives students an even greater sense of pride in the work they’ve done and ignites a desire to carry that work forward “and keep learning and keep listening.”

At noon on Tuesday, Simon is set to visit with University of Victoria students who are enrolled in both the ­Indigenous Language Revitalization ­Program and the Joint Degree Program in Canadian ­Common Law and Indigenous Legal Orders.