‘Cookie-cutter approach’ a no-go as B.C. grapples with transportation challenges ahead 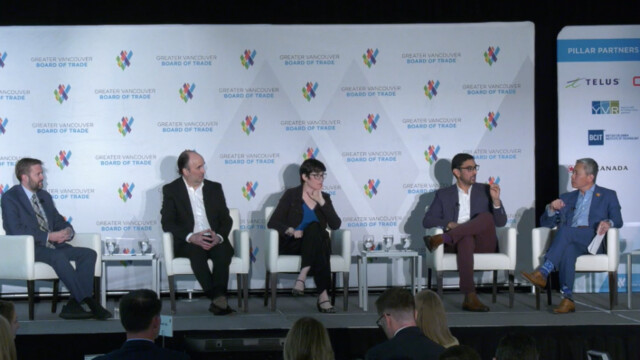 There’s no hint of doubt in Grant Stockwell’s voice:

“The future of car-sharing is electric,” according to the chief mobility officer at BCAA, whose company offers roadside assistance, sells insurance products and operates Evo Car Share.

Evo, which is expected to have 1,900 cars in its fleet by this September, deployed its first electric vehicle (EV) at the end of 2021.

“And we would love to have [the entire fleet] electrified. But we're not there yet, able to run that fleet and be able to charge them,” Stockton said during Friday’s transportation forum at the Greater Vancouver Board of Trade, where he was among the dozen experts tackling everything from urban mobility to supply chains.

As B.C. grapples with how the pandemic has rapidly upended traditional transportation practices, experts at the forum repeatedly emphasized the need for more collaboration among stakeholders.

Devan Fitch, the director of infrastructure delivery at the Vancouver Fraser Port Authority said the “chronic shortage” of industrial land is one of the biggest issues facing the region’s ability to compete with other jurisdictions.

“It really constrains our ability to move cargo efficiently through the region and that drives up costs to Canadian consumers of imported goods,” he said.

Those sentiments were echoed by Air Canada (TSX:AC) vice-president of cargo Jason Berry, who noted air cargo had been on the decline prior to the recent ecommerce boom.

“There had not been a lot of investment in cargo facilities at airports,” he said.

The lack of space means more backups getting goods to their final destinations.

And Fitch said it was imperative for stakeholders to avoid tackling transportation issues as if they were isolated problems. Instead, he said, they take a more holistic approach with other parties.

As for Stockton’s efforts to introduce more EVs into the Evo fleet, he recounted turning to European counterparts in Norway and Germany who’ve had success in this realm.

There, he said stakeholders in Hamburg and Berlin have been able to collaborate extensively with government.

“But what also was interesting, which I didn't anticipate, was business-to-business infrastructure and agreements,” Stockton said, adding a grocery chain offering charging stations to customers during the day might be able to offset some of those costs by allowing car-share providers to re-charge in those empty parking lots in the evening.

Meanwhile, Sandra Philips, CEO of Vancouver-based Movmi Shared Transportation Services Inc., said large ride-hailing players have been slowly waking up to the fact they can’t apply a “cookie-cutter approach” when offering their services in different jurisdictions. What may have worked in one city doesn’t automatically translate in another.

“They're also starting to realize that transportation is actually very local and you’ve got to make adjustments,” she said.