Contracts still not awarded for permanent repairs to the Coquihalla, set to begin this summer 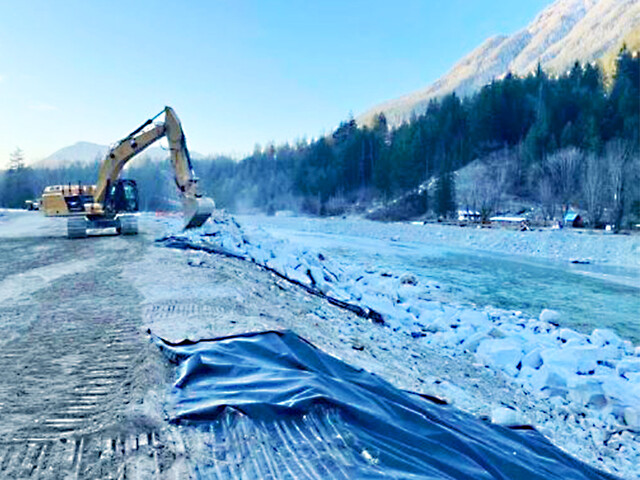 Photo: Transportation BC
Crews are amouring vulnerable areas of Highway 5 with additional rocky material (riprap) in preparation for freshet.

The contracts for long-term repairs to the Coquihalla Highway still have not been awarded.

The Ministry of Transportation and Infrastructure announced on March 24 that it is moving ahead with permanent repairs after catastrophic flooding damaged large sections of the highway last November.

The initial work will return the highway to four lanes between the summit and 50 kilometres south of Merritt.

The ministry said contracts for the bridge were expected to have been awarded by late April or early May. Construction is supposed to begin in the summer and be completed by the end of the year.

Permanent repairs to another section of Highway 5 near Othello, just east of Hope are also out to tender.

In an email to Castanet, MOTI Said the request for proposals (RFP) are in the market and the preferred proponent will be announced in the coming weeks.

Snow has fallen on the route in the past few weeks and a cooler-than-normal spring has delayed the onset of the spring melt. More snow is forecast over the next few days on mountain passes in the Southern Interior, including along Highway 5.

The ministry is monitoring the snowpack, river levels and the weather and its highway maintenance contractors are actively monitoring and preparing for potential flooding due to the freshet.

Preparations are being made for work to begin. Proactive maintenance is underway including cleaning and repairing ditches and culverts, stockpiling of material, including rip rap and evaluating and reinforcing infrastructure where needed.

Transportation Minister Rob Fleming says the repairs will leave the highway in better condition than it was before a storm known as an atmospheric river dumped record-breaking amounts of rain on much of southern B.C. last year, causing floods, slides and washouts.

Efforts will be made to minimize traffic disruptions during peak travel times and to complete the work overnight where possible, but the ministry says delays, including periods of single-lane alternating traffic and short, intermittent full closures, are expected throughout construction.

Details on permanent fixes to other flood-damaged highways, including Highway 1 through the Fraser Canyon and Highway 8 in the Nicola Valley, are expected in the coming weeks. Temporary repairs are still underway on some of those routes, including along Highway 8 between Merritt and Spences Bridge.

MOTI adds that estimates for temporary repairs to washed out and flood-damaged highways remain in the range of $170 to $220 million.