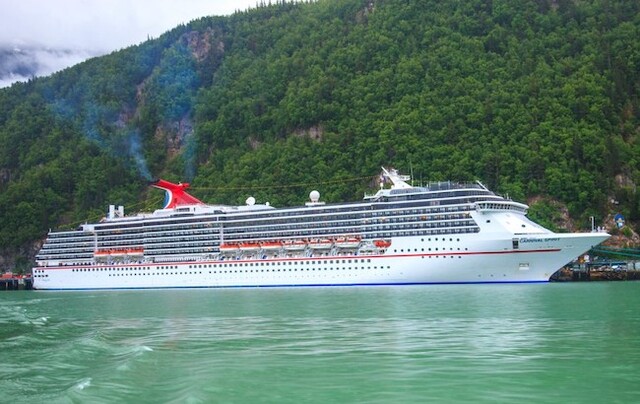 A cruise ship stricken with several cases of COVID-19 last week is expected to arrive in Victoria for a brief stopover today.

The outbreak on the Carnival Spirit, which departed Miami on April 17 and arrived May 3 in Seattle, saw several passengers testing positive for the virus and placed under quarantine. The U.S. Centers for Disease Control started an investigation and the ship remains under observation, according to the CDC’s COVID-status dashboard.

The Carnival Spirit is labelled by the CDC as having an orange status, indicating that 0.3% or more of the people on board — passengers and crew — had tested positive.

The ship offloaded passengers testing positive for COVID in Seattle and left Tuesday for Skagway, Alaska. It is now on its return voyage.

The Carnival Spirit will dock at Ogden Point at 8 p.m. Monday and leave just before midnight.

On short stopovers, especially in late evening, it’s not that common for passengers to leave the ship because of the tight turnaround in scheduling.

Carlo Chaidez, spokesman for Carnival Cruise Line, told the Times Colonist on Sunday that the Carnival Spirit “managed a number of COVID cases” during its 16-day sail through the Panama Canal to Seattle, but did not provide the number of cases.

“There were no serious health issues, and while some guests showed minor symptoms, most were asymptomatic,” Chaidez said.

He said all guests who were scheduled to continue on with the ship’s next cruise to Alaska and Canada were tested and any guests who tested positive were disembarked along with their travelling companions.

“Our health and safety protocols exceed CDC guidelines and were closely followed, including vaccination requirements and pre-cruise testing of all guests. Our crew are also vaccinated and wear masks,” said the cruise line.

Chaidez said Carnival protocols are designed to “flex up as needed” and additional measures were implemented during the voyage.

Some passengers aboard the Carnival Spirit told national news networks in the United States that the ship was “overwhelmed” and allegedly unprepared for the outbreak, citing lack of quarantine space and poor service and communication to those who were isolated.

Victoria is scheduled to see two other cruise ships in port Monday: the Carnival Splendor and the Norwegian Sun.

The Splendor is not listed on the CDC ship-status dashboard. It is expected to arrive at 8 p.m. and depart by midnight.

The Sun will be in Victoria from 7 a.m. to to 11 p.m. It is one of only 15 ships on the CDC dashboard showing green status, meaning there are no reported COVID cases on board.

Of the 91 cruise ships opting into the CDC status dashboard, 62 were listed as having orange status on Sunday. Fourteen ships had yellow status, where reported cases are below the threshold for a CDC investigation.