BC Hydro tweet 'childish, out of line,' say MLAs 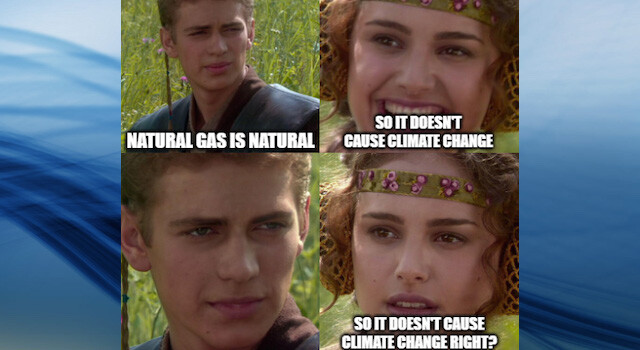 Northern MLAs are calling out BC Hydro's sideways dig at its industrial neighbours and partners in the region.

The public utility took to social media Wednesday to tweet a Star Wars-inspired meme ridiculing the natural gas industry with the hashtag “#FarewellFossilFuels.”

“Natural doesn’t mean clean,” BC Hydro said in its post Wednesday morning, and which has since been reposted more than 100 times.

The tweet drew swift scorn from Twitter users, including Peace River MLAs Dan Davies and Mike Bernier, who chided BC Hydro’s public messaging for being "childish" and beneath the standards of a publicly-owned corporation.

“This is completely out of line for a Crown corporation,” Bernier tweeted in response, saying the BC NDP government “appears to be doing everything possible to attack the resource sector and all the First Nations and communities that support them.”

Bernier said the tweet ticked him off, "especially after the government increased the tax on fossil fuel appliances where many of us don't have a choice."

Davies said he was surprised to see BC Hydro “attack” rural communities that work in the resource sector for the benefit all British Columbians. “I would suggest deleting this tweet and stick to your lane,” he responded.

BC Hydro is building the $16-billion Site C dam on the Peace River outside Fort St. John in large part to power the natural gas industry in Northeast B.C., which will feed the LNG Canada export terminal on the coast in Kitimat via the Coastal GasLink pipeline.

Among the projects include the $239-million Peace Region Electricity Supply project to meet demands for natural gas exploration and development in the South Peace. It's also studying the potential to build a new transmission line to electrify operations in North Montney.

BC Hydro is also spending tens of more millions to electrify LNG operations in Kitimat, where LNG Canada is expected to operate for at least 40 years — well beyond 2050. Developers are clamouring to build more LNG projects in B.C. too, with the Woodfibre project in Squamish recently receiving the green light for construction in 2023.

In a statement, BC Hydro spokesperson Simi Heer said the utility "has a huge opportunity" to help industry reduce emissions, and that advancing electrification projects “involves moving away from powering heating and transportation with fossil fuels to clean hydroelectricity.”

“Our social team is working to increase awareness of hydroelectricity and how it can help people reduce carbon emissions in B.C. This involves creating compelling, humorous content that makes people stop and pay attention,” said Heer. “In fact, the social content shared yesterday has generated a very healthy discussion about energy sources and climate change.”

Davies said Thursday that Hydro's tweet was “childish” and that a global energy crisis is not a joking matter.

“In what we’ve seen with the energy crisis around the world, and the need for natural gas in places like Europe, major growing economies like India and China, it’s incredibly short-sighted to have this Crown corporation belittling such an important industry to B.C.’s economy,” Davies said.

“It’s not one or the other. Hydro is as important as natural gas. You don’t see the natural gas industry out there saying, 'Screw hydro’, whatever the meme might look like,” he said. “I think at the end of the day, their joke fell flat, and was written by someone who has no understanding of the integrated resource sector of B.C.”

The tweet was panned by other Twitter users across the political spectrum, one of whom said it was "bad form to dump all over your customers."

Rebecca King Pimm said, "Who ever runs @bchydro social you are extremely immature. Please grow up and bring some integrity to the conversation."

"Anyone looking at the Peace Valley right now knows that there is nothing clean, renewable or green about the #sitec dam," Fedderly tweeted. "The only thing worse than the environmental destruction is the economics."

This is completely out of line for a crown corporation. More evidence that this #BCNDP Gov appears to be doing everything possible to attack the resource sector and all the First Nations and communities that support them. @jjhorgan do better!! @OilGasCanada #bcpoli https://t.co/jC5CXBG5IW