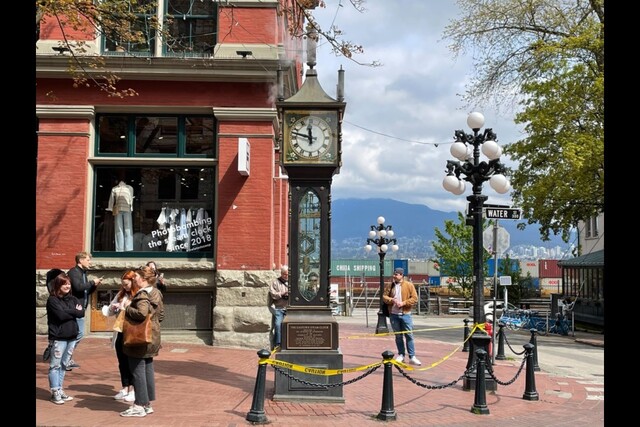 One of Vancouver's most recognizable landmarks was damaged this weekend.

The Gastown steam clock has had the glass smashed on one side of its middle section which protects the pendulum. Many cracks have spider-webbed across the glass, though there's no clear impact point.

While the glass is clearly broken, it appears none of it has fallen out of place. It's unclear what caused the damage.

The Vancouver Police Department says it's investigating the damage, which was first reported to them Saturday, April 30, in the evening. Forensic evidence is being collected along with security camera footage. Police are also looking for witnesses.

Tourists are still gathering to take photos of and with the iconic clock.

Someone has placed yellow caution tape around it. In a tweet, the City of Vancouver noted it is aware of the damage.

The clock was built and installed in 1977 by Raymond Saunders, a local clockmaker, costing around $58,000, which was paid for by the city and donors. It covered a steam grate, which is part of the city's huge steam heating system.

With files from Carol Eugene Park and Thor Diakow.