Orcas up close in harbour 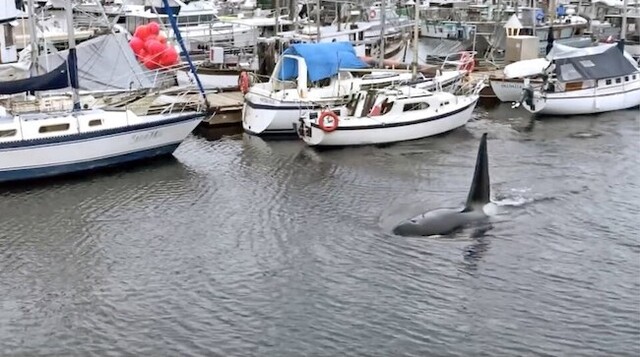 Five killer whales likely on the hunt for seals swam right into Comox Marina over the weekend, gliding through clear water within a metre of boats, much to the delight of onlookers on the pier.

The family of transient, or Bigg’s orcas, including 21-year-old male T049A1 — also known as Noah, with his towering dorsal fin — was filmed by Nicky Smiley, who runs a Facebook group called Comox Valley Wildlife Sightings.

Killer whales often travel and hunt within their matrilines — lines of descent from female ancestors.

The group entered Comox Bay about 7:40 p.m. on Sunday. The encounter lasted more than two minutes before the orcas exited around the rocky breakwater.

The population of Bigg’s orcas is booming in the Salish Sea, with 11 new calves born last year. The growth is linked to healthy populations of their main prey — seals and sea lions.

On March 31, at least 72 single Bigg’s killer whales were spotted in the Salish Sea, a new single-day record, according to Mark Malleson, researcher for the Center for Whale Research.

Whale watchers in Washington and southern British Columbia saw 10 distinct groups of orcas on that day.

Data collected by the Department of Fisheries and Oceans indicate there are 400 to 500 Bigg’s orcas ranging from California to Alaska, with about 350 of those regularly making their way into the Salish Sea, which includes the Puget Sound, Strait of Georgia, Juan de Fuca Strait and the San Juan Islands.

An abundance of food has led to the births of more than 130 calves over the past decade, a population growth rate of more than 4% a year.

The salmon-eating southern resident whales, meanwhile, are down to 74 animals in three pods with the loss this summer of a 35-year-old male known as Cappuccino.