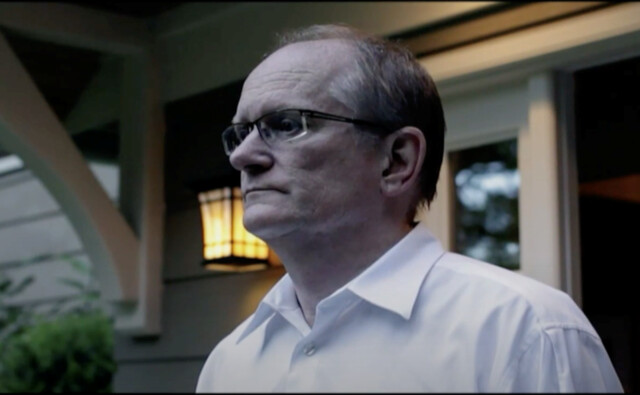 Photo: YouTube screenshot
Fred Sharp, seen here in an undated short film moonlighting as an actor, has been criminally charged of securities fraud and conspiracy to commit fraud in the United States.

The alleged "mastermind" of an offshore shell scheme is believed to have siphoned around $7 million through his wife's Vancouver tennis coach, allege U.S. authorities.

The money was transferred from a Swiss trading platform named Wintercap SA to a Marshall Islands-based company called Cortona Equity Inc. between August 2017 and July 2018.

But the money didn't belong to the tennis coach, say investigators at the U.S. Securities and Exchange Commission (SEC) and the Federal Bureau of Investigation.

"(Fred) Sharp had installed his wife's tennis coach as the purported beneficial owner of Cortona," states the commission's proposed amended complaint on Feb. 3.

Sharp and seven other Canadians face civil charges related to an offshore shell scheme that facilitated over one billion dollars of gross illegal trading proceeds via hundreds of American penny stock companies. Sharp, a West Vancouver resident, is the alleged mastermind, say authorities.

The SEC was allowed to amend its complaint by U.S. District Judge William G. Young of the District of Massachusetts in January after several of the accused objected to the charges, citing not enough evidence against them in the initial complaint.

A Jan. 20 hearing was held to iron out details of motions to dismiss from alleged co-conspirators Jackson Friesen, Graham Taylor, Paul Sexton, Zhiying Yvonne Gasarch, Courtney Kelln and Mike Veldhuis. All of the accused are believed to be residing in the Metro Vancouver region. They are all presumed innocent until a court rules on the allegations.

For his part, Sharp has not responded to the commission, which filed for a default judgment against him and now seeks US$52.9 million.

It is a significant case for the SEC, one it describes as "a sophisticated, multi-year, multi-national attack on the United States financial markets and retail United States investors by foreign and domestic actors."

"The Sharp Group deliberately concealed the identities of its clients through the array of services it offered, including forming and providing offshore nominee companies that could hold shares for undisclosed control persons; providing and administering an encrypted communication network." stated the commission.

Sharp liaised between clients (company officials) and trading platforms such as Wintercap SA. According to intercepted communications submitted to court, Sharp would tell clients: "The service provided is comprehensive; it is not limited to trading. It includes pyaments [sic], loans, private placements and keeping clients out of jail."

Someone who couldn't avoid jail was Wintercap SA owner and operator Roger "Rocket" Knox, who pleaded guilty to criminal securities fraud and conspiracy to commit securities fraud on Jan. 13, 2020. Knox admitted Wintercap SA engaged in a scheme to fraudulently sell stock of numerous public companies by, among other methods, concealing identities of company control persons and obscuring ownership of shares. Knox opened "omnibus brokerage accounts" across Europe, America and Canada.

Control persons can be large shareholders and/or company officials who are required under law to be transparent about their stock transactions.

Gasarch was nicknamed "Wires" by the group in some intercepted communications.

The commission alleges she typically arranged wire transfers of the proceeds of illegal stock sales. This included "routinely creating false invoices, loan and subscription agreements, and other documents that purported to originate from Sharp Group-administered nominees, and that could serve as the 'back up' to support these payments if they were questioned by the banks and brokerage firms from which the proceeds were being sent," the commission alleges.

In one example provided by the commission, Gasarch created an invoice to a Sharp nominee called Quezon Group LLC for $125,000 from a homebuilder in Canada that was renovating a property for one of the Sharp Group's clients. She sent this invoice from a Quezon Group email to Wintercap SA to request a payout. This was purportedly for a 500,000 share subscription.

Gasarch also allegedly modified a law firm invoice for a $129,000 payout in connection to a company working with Veldhuis.

After citing more examples, the commission concludes: "Gasarch understood that her job was to obfuscate the source and destination of distributions that the Sharp Group's clients were taking from their fraudulent trading proceeds and that they were laundering through the Sharp Group."

The commission reveals text communications Gasarch and Sharp have showing concerns about money laundering and keeping their operation concealed.

"On aug 12 u wrote a draft for grand yachts against cash. Cld u pls explain to me how this is legitimate payment? My concern is money laundering: hells angels gives us cash, we give them a draft to buy a boat. Later, boat is seized, polic investigate, find out charterhouse paid for it; visit us and ask why. What will u say?" Sharp tells Gasarch.

"Can we lend money to them? Thomas asks them sign loan agreement for us. Thomas will call me back," Gasarch replies.

The commission provides no context for the text, and so it's unclear whether or not Sharp was using the Hells Angels as an example of risk in providing a draft without fully vetting a client.

In another example, Sharp is shown to direct Gasarch by text message to forge a notary's signature.

"Sharp chided Gasarch: 'Of course u do; his name is on the stamp!,' thus telling Gasarch to sign for the notary," the complaint shows.

The commission alleges "Gasarch was also involved in the movement of Sharp Group clients' shares to Wintercap SA" and she "recklessly or negligently disregarded" her clients were paying for promotions for the stocks they were involved in selling and thus had to separate nominees who paid for those promotions and nominees that held the stock.

And, alleges the commission, Gasarch drafted a memo to Sharp-network phone users on how to delete secure chats when crossing borders.

The commission also turned its focus on Graham Taylor, who appeared to work closely with Dhillon. Among Taylor's charges is aiding and abetting.

The complaint shows how parts of the scheme were orchestrated in Vancouver.

"In or about early 2011, Taylor introduced Dhillon and the then-Chief Executive Officer (the "CEO") of Dhillon's private company to certain of Taylor's contacts in China and to an attorney in Vancouver," the complaint states.

The complaint demonstrates how Dhillon completed a reverse takeover of a company called Stevia First, garnering tens of millions of shares under his control only to allegedly sell millions of them illegally by failing to disclose his beneficial ownership interest nominee companies arranged by Taylor.

"In particular, between approximately April and June 2012, the Veldhuis Control Group used the Sharp Group to remit eight wire payments, all funded by Stevia First stock-sale proceeds, and totalling over $4.2 million, to Swiss bank account of an offshore front company that Taylor controlled; and Taylor, in turn, promptly transferred over 60% of that money to Dhillon," the complaint alleged.

And, to allegedly "obfuscate his role in the scheme," Taylor "signed a fraudulent and backdated Option Agreement that purported to justify his payments to Dhillon as purchases of interests in a parcel of land owned by Dhillon."

The amended complaint concludes by re-iterating the charges against the group, all of whom are accused of "fraud in the offer or sale of securities."

The commission still needs to have the judge approve a motion to submit the amended complaint officially.

Gasarch's Boston lawyer Karen Pickett has maintained opposition to the complaint on grounds the allegations are time-limited to five years for someone who resides outside of the U.S.

Furthermore, "nothing new alleged by the SEC ties Ms. Gasarch to the alleged scheme such that a prima facie case has been made that she 'knew' of a securities law violation and provided substantial assistance to the wrongdoer(s)."

Instead, "the allegations largely place her in an administrative role, conducting wire transfers and sending emails."

In a March 3 filing, Pickett told the court that many of the allegations lack details, such as whether Gasarch wrote some of the emails in question and how the commission failed to show a specific purpose for certain transfers.